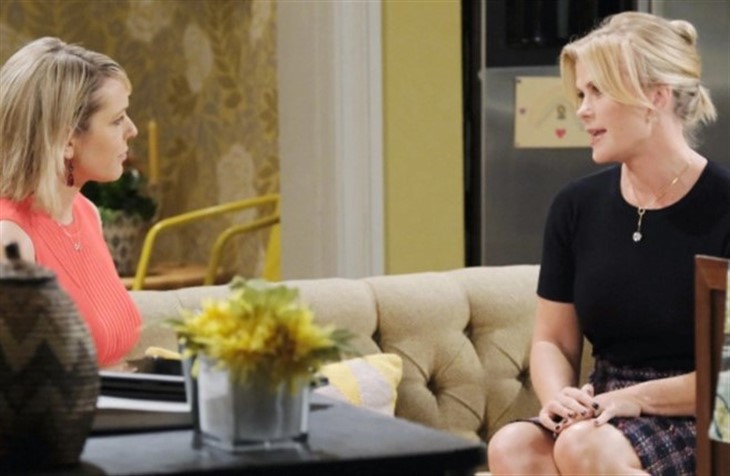 Days of Our Lives spoilers reveal that Sami DiMera (Alison Sweeney) angrily confronts Nicole Walker (Arianne Zucker). She blows up over Nicole giving EJ DiMera (Dan Feuerriegel) the letter that Kristen DiMera (Stacy Haiduk) wrote. However, Nicole gives Sami a reality check and explains why EJ found out in the first place. How does Salem’s schemer respond to the truth?

DOOL spoilers reveal that after EJ finds out the truth, Sami heads straight to Nicole. She blows up at her enemy about EJ finding out about her secret. Rafe just happens to be with Nicole during the confrontation, which changes Nicole’s reaction a bit. If it were just Nicole and Sami, the heated discussion would probably get out of control. As many fans know, Nicole would sneer, snicker and gloat over getting revenge.

However, with Rafe around, Nicole puts on her best adulting mask and explains why Sami has no one to blame but herself.

Nicole tells Sami that she was the one that came after her marriage first. She just couldn’t mind her own business and kept digging for information. Then, she went as far as to pay Xander Cook (Paul Telfer) $1 million to expose the betrayal. It wasn’t enough for Sami to just tell Eric Brady (Greg Vaughan) about the one-night stand. She just had to do it publicly in a way that not only destroyed Nicole’s marriage but left Eric humiliated. Sami is informed that blowing up “Ericole” is the only reason why Nicole even bothered to give EJ the letter.

Days Of Our Lives Spoilers – Moment Of Understanding

Days of Our Lives spoilers reveal that there is a moment of understanding between Nicole and Sami. Don’t get too excited because it’s just for one moment and likely won’t last. Sweeney previewed the upcoming scene with Soap Opera Digest. The actress explained,

“And there is this moment between the two of them as women who are sort of on a similar path and see life sometimes in the same way, and Nicole does try to get through to her. It’s a much more meaningful set of scenes than just a catfight.”

For a moment, it seems that Sami realizes that she opened the door for revenge by destroying Eric and Nicole’s marriage. However, she isn’t ready to accept the truth yet. She decides that someone else is to blame for all of her problems. Now that she can no longer blame Nicole, she turns her attention to attacking Lucas Horton (Bryan Dattilo). How will he respond when Sami explodes and blames him for ruining her life?