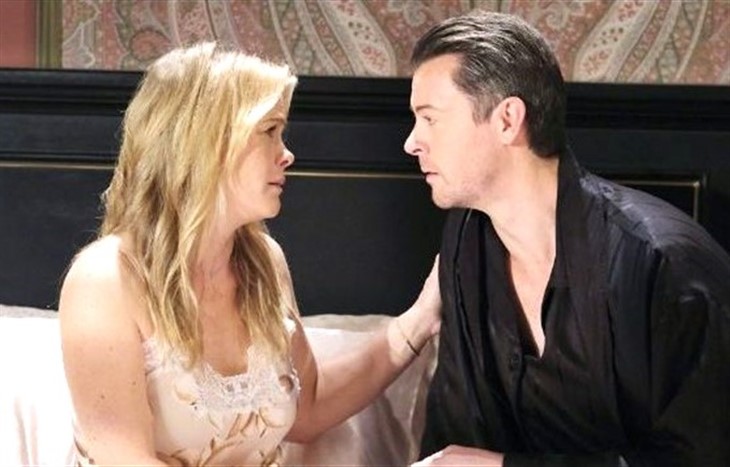 Days of Our Lives spoilers reveal that after having a temper tantrum, EJ DiMera (Dan Feuerriegel) calmed and composed himself. He joined Sami DiMera (Alison Sweeney) for a candlelit dinner. EJ will drop a bomb by mentioning Lucas Horton (Bryan Dattilo). His plan will horrify her, which suggests Sami might be forced to make amends in an unthinkable way.

DOOL spoilers reveal that Sami did everything in her power to keep her cheating a secret from EJ. She even went to great lengths to find Kristen DiMera’s (Stacy Haiduk) letter and threw it in the fireplace. However, soap fans know you stand there until it turns to ash. She walked away and that gave Lucas the opportunity to salvage the letter. It bounced around Salem for a bit until it landed in the hands of the person it was addressed to. Now EJ knows the truth and the consequences are going to be explosive.

Before the soap went on hiatus for the Olympics, EJ had a violent temper tantrum after reading Kristen’s letter. Then, he calmed himself down and went to have a candlelit dinner with Sami. He was perfectly composed and even gave Sami a small kiss on the cheek. She thinks everything is just perfect and that is exactly what EJ wants. He waits for the perfect moment to blindside Sami and tells her all about the betrayal.

Days Of Our Lives Spoilers – Offering One Chance Of Forgiveness

Days of Our Lives spoilers reveal that Sami will likely beg for forgiveness. She will try to explain that the cheating happened before EJ showed up in Salem. She will mention how perfect their marriage is right now and that she loves him. However, none of that is going to make EJ feel better about this situation. He wants Lucas and Sami to both pay the price. At the same time, he doesn’t want to lose Sami. He might also feel like something extreme has to happen to teach Sami never to betray him again.

EJ will probably tell Sami that it’s okay and he understands. He might even tell her that she has forgiveness. As Sami suddenly exhales with relief, that’s when EJ will drop another bombshell. Forgiveness from a DiMera doesn’t come free and Sami needs to pay the price. She’ll probably agree to do anything, but that’s before she finds out about EJ’s revenge scheme.

It is teased that Sami will be horrified by EJ’s plan. She already knew that if EJ found out the truth, then Lucas would suffer the consequences. That is bad enough as Sami does care about her ex. What would turn this into a worst-case scenario is if EJ forced Sami to be the one to destroy Lucas’ life. It will also force her to finally make a choice between EJ and Lucas. She will really have to think about if her marriage is really worth destroying Lucas, a man who has always been there for her and their children.

On the other hand, if Sami refuses EJ’s ultimatum, then she will lose everything. Not only that, but who knows what EJ would do to make both her and Lucas suffer. Even though Sami has always been known for her selfishness and extreme schemes, she might have a chance at redemption. But it won’t just cost her everything, she could also lose everyone she cares about.