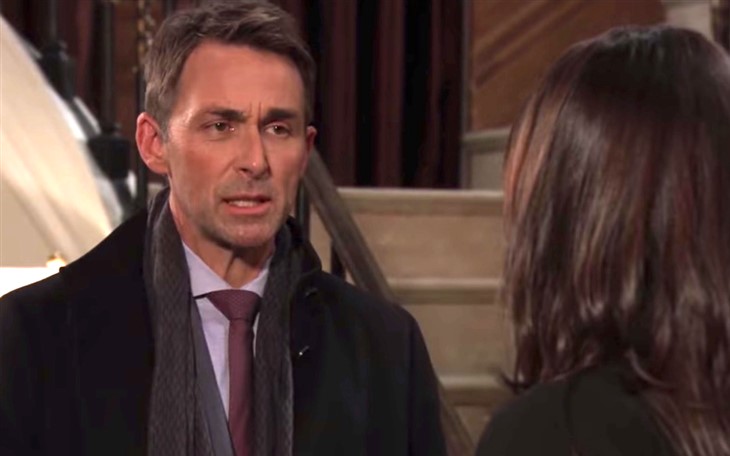 General Hospital spoilers and rumors tease that the real Chloe Jennings will be discovered as Valentin Cassadine (James Patrick Stuart) and Anna Devane (Finola Hughes) search for the missing Peter August (Wes Ramsey) in a future episode of General Hospital. General Hospital viewers will remember that they have also been searching for “the missing” baby Louise Jones (Harper and Scarlett Bloom), so now that Peter’s body is missing it makes sense for them to assume that somehow Peter and the baby may be together. Even though Peter’s fake passports may have been either put back in Peter’s pockets or destroyed by Dr. Hamilton Finn (Michael Easton) and Nurse Elizabeth Baldwin (Rebecca Herbst) when they stuffed him in the morgue freezer from which he recently disappeared, it is possible that the travel plans associated with the passports may be discovered and give them a lead as to where to look.

General Hospital viewers will recall that Peter had arranged to be picked up by helicopter from the roof of General Hospital. However, it turned out that medevac pilot David Hopkins (Robert Leeshock) was not allowed to land the chopper. Even if Hopkins had been able to pick up Peter, he was only taking him to Pautuck, New York where Fake Chloe Jennings (Kimberly J. Brown) was supposed to be waiting with Maxie Jones (Kirsten Storms) and the baby. From there, the likely route may have been to an airport where Peter would have used his fake passports for the rest of the route. Undoubtedly, Peter’s plans were to leave the country with Maxie and their baby, Peter had even said as much to Maxie in the hospital the last time he talked to her.

The leaked General Hospital script places Valentin and Anna in an American Embassy hospital with a severely injured Chloe and a doctor. The fact that they are in an American Embassy hospital shows that they are somewhere overseas, possibly in the country where Peter’s fake passports would have taken him, Maxie and Louise had his plans not backfired. General Hospital viewers will recall that Peter kidnapped the real Chloe after Maxie had hired her, Maxie having thought that her telling Peter she’d hired a nurse to look out for her in her last days of pregnancy would assure him he didn’t have to keep checking on her.

But instead, he was assumed to have killed real Chloe, with the last scene showing him throwing her nurse’s badge and her driver’s license in a dumpster. As for Fake Chloe, she was revealed to be David Hopkins’ sister and she indeed did die at the bottom of an old mine shaft in the woods outside Pautuck, Maxie having escaped. Valentin and Anna’s mission lead them to finding real Chloe, but may not do much more than confirm that the country where they find her is where Peter may now be, with or without the baby!