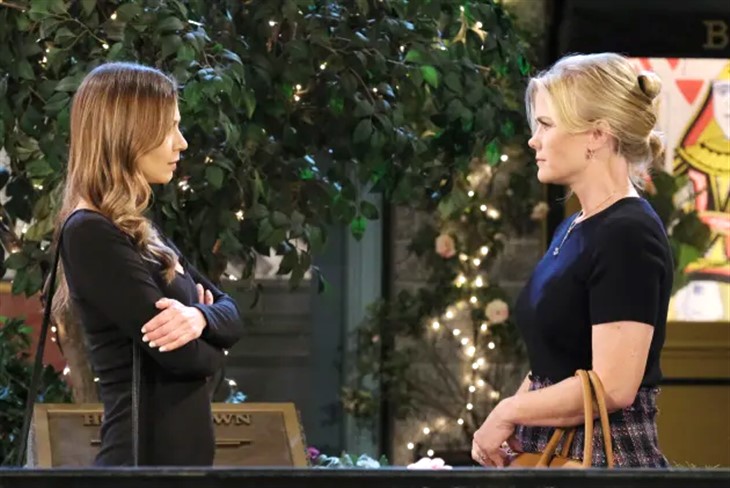 Days of Our Lives spoilers reveal that Ava Vitali (Tamara Braun) will find out what Sami DiMera (Alison Sweeney) did to Nicole Walker (Arianne Zucker). When Sami first went on her crusade, Ava warned her to back off and that Nicole had been through enough. Sami didn’t listen and blew up “Ericole” in a very public way. Now she is going to face even more consequences.

DOOL spoilers reveal that Nicole had a one-night stand with Xander Cook (Paul Telfer). However, Sami is also a cheater as she kept sleeping with Lucas Horton (Bryan Dattilo). Despite both of them committing the same sin, Sami felt Nicole’s was so much worse. She became fixated on proving Nicole betrayed Eric Brady (Greg Vaughan).

She finally did it by having the truth come out at Eric and Nicole’s anniversary party. She got what she wanted, but she hasn’t even thought about how her actions hurt her twin brother.

When Sami first started looking for proof that Nicole and Xander slept together, Ava confronted her. She told her that Nicole had been through enough during the past year and to just give it a rest. The mobster’s daughter also made it clear that if Sami continued pursuing it, then she would have to deal with her.

Days of Our Lives spoilers reveal that next week, Nicole will turn to Rafe Hernandez (Galen Gering). She will tell him everything and explain what happened after she left the party to talk to Eric. Nicole will be heartbroken and Rafe will comfort her. Ava walks in and sees the two in each other’s arms. Rafe explains that he’s just comforting a friend and for the time being, Ava accepts that answer. Then, Ava will find out everything that happened, including that Sami was behind Xander’s stunt.

It is confirmed that after Ava learns all the details, she decides to get revenge. She warned Sami a while ago not to keep digging for information on Nicole’s private life. Sami ignored the warning and did it anyway. Sami is already going to be punished by EJ DiMera (Dan Feuerriegel). He kicks her out of the mansion and her family isn’t too pleased with her, either. If Ava follows through with her plans, Sami is going to be in a world of hurt.

What do you think of Ava wanting to get revenge for what happened to Nicole’s marriage? How far will Ava go to make Sami pay and could there be consequences? We will have to keep watching the NBC soap to find out what happens next.