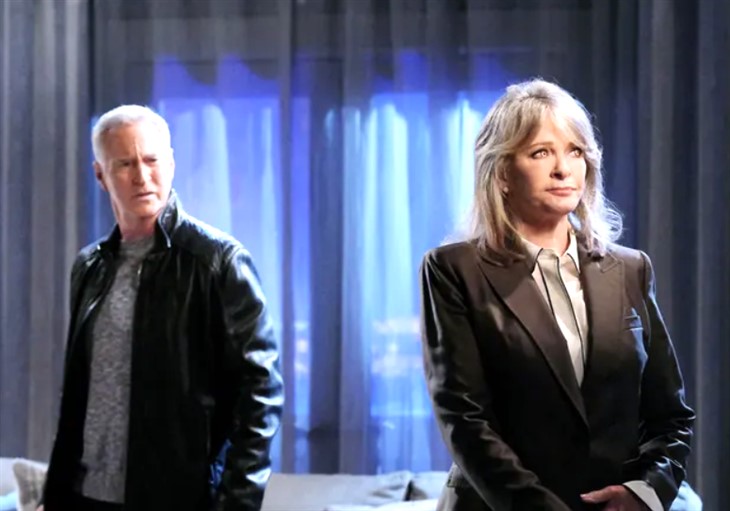 Days of Our Lives (DOOL) spoilers reveal that John Black (Drake Hogestyn) saved Marlena Evans (Deidre Hall) when she was possessed 27 years ago. It is speculated that will save “Doc” once again. However, Hall mentioned that Satan doesn’t consider John a threat at all. The actress hinted that John could be easily eliminated if necessary.

DOOL spoilers reveal that the first time Marlena was possessed by the devil, John tried to save her. At the time, John believed he was a priest and performed an exorcism. The devil was difficult to cast out. Just when it seemed as if all was lost, John used their love to overcome evil. When John told the story of Marlena’s possession to Allie Horton (Lindsay Arnold), he said that their love defeated Satan.

According to Soap Opera Digest, executive producer Ken Corday confirmed that John quickly discovers the devil is back. This happens during the week of October 18 during one of John and Marlena’s conversations.

The first time that Satan took over Marlena’s body and mind, the devil hoped to turn Salem into hell on Earth… literally. The evil entity seemed to favor interfering with and ruining relationships.

This time, the devil has a different goal, which is to make sure that Ben Weston (Robert Scott Wilson) and Ciara Brady Weston (Victoria Konefal) have a child together. Hall explained to SOD,

“… she just wants to get on with the job at hand, which is getting Ben and Ciara to have a baby.”

Days Of Our Lives Spoilers – John Black Not A Threat

Days of Our Lives spoilers reveal that John might have been able to get rid of the devil before. However, Satan doesn’t consider John a threat at all. This might be due to John’s age and recent medical issues. However, it is more likely that the lack of fear is from Satan knowing that John isn’t – and never was – a priest. John only thought he was a priest due to Stefano DiMera (Joseph Mascolo).

John’s love was able to save Marlena the first time she was possessed. So, whether he’s a priest or not won’t matter. John and Marlena’s love is just as strong as ever. So, if love truly cast out the devil once, then it can be done again.

John needs to be careful, though. Even though Satan doesn’t think John is a threat, that could change. Perhaps the devil will get annoyed with John getting in the way.

“I don’t think underneath all of it, she’s really concerned about John. She can do anything. He can trip off the ledge of the apartment, a number of things could happen. John is not a life threat to her, so I think she just wants to get on with the job at hand…”

Days Of Our Lives Spoilers – An Unforgivable Act

Back in June 2021, Hall was backstage at the Daytime Emmy Awards. The actress spoke to Soaps.com at that time about if there was anything Marlena could do that fans wouldn’t accept or forgive. Hall teased,

“We’re on the verge of some of it. We’ve got something coming up in… about three months. You’re going to go, ‘I don’t even know if I can go for that!’”

Could “MarDevil” 2.0 actually try to kill John? Is this what Hall meant when she suggested that Marlena could finally lose her status of the moral compass? Would you forgive Marlena if she tried to end John’s life or is that a dealbreaker?