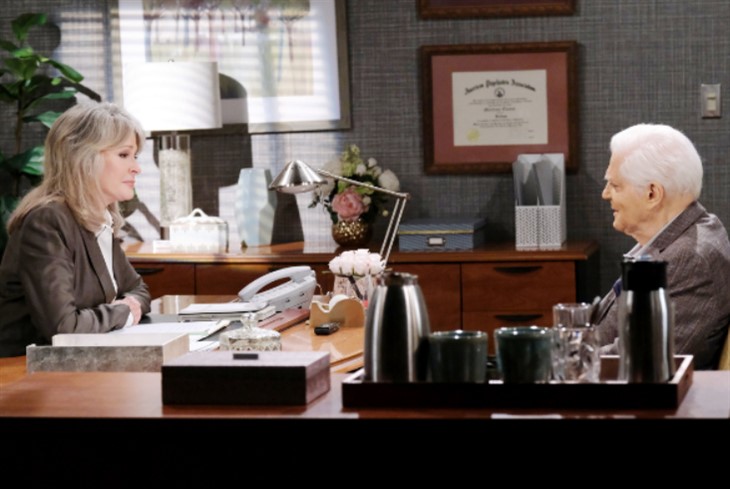 Days of Our Lives spoilers tease that Marlena Evans (Deidre Hall) will be horrified as the devil forces his diabolical plans in an upcoming episode of DOOL!

Days of Our Lives viewers will recall that the devil took over Marlena’s recorded notes on Doug Williams (Bill Hayes)! The devil has already left Doug and gone into Marlena as he tried to tell both Julie Williams (Susan Seaforth Hayes) and Eli Grant (Lamon Archey). But neither Julie nor Eli could understand what he meant, and Julie has chocked the confusion in Doug up to side effects from medicine! If only John Black (Drake Hogestyn) had been in the room – he would have immediately known what was going on!

Marlena, in her right self, of which there is still some left of, was horrified to realize that under the devil’s influence, she had tried to murder both Doug and Julie, trying to smother Doug with a pillow and knocking Julie down on the floor! Days of Our Lives fans will see Marlena become more and more horrified as the devil continues to force his diabolical plans using her body!

DOOL Spoilers – Marlena Evans Is Not Yet Totally Occupied By Satan

Days of Our Lives viewers know that Marlena is not yet totally occupied by Satan, and that some of herself still remains. Longtime Days of Our Lives viewers will recall when she was totally possessed, or occupied and saw her levitate above her bed! She would turn into Mardevil and commit any number of horrible acts during that time. Marlena is horrified remembering those days, because even though she may not have known what the devil was doing through her at the time, she saw the effects.

Now she also sees the effects, and the devil is taking up more and more space inside her body and mind. Viewers will see her eyes turn orange as a sign that Satan is operating – but he withdraws and hides behind real Marlena when someone notices something’s off!

Days of Our Lives spoilers tease the devil telling Marlena of his plans – and if she refuses to do his bidding, terrible things will happen to those she loves. Not only that, but longtime Days of Our Lives fans will remember that the devil will either force her to do the terrible things or the devil might slip out of her and into them at any time he wants to! That seems to be what has been happening lately with Doug’s possession versus Marlena’s.

No one knows how or when the devil got into Doug – but he certainly used him to get Marlena’s attention! The devil has literally been blackmailing Marlena with killing Doug and others if she doesn’t allow him full residence within her. Yet, he seems to have the capacity to inhabit someone at least partially without their approval! That fact is made abundantly clear to Marlena, who is giving her a laundry list of devilish deeds to perform!