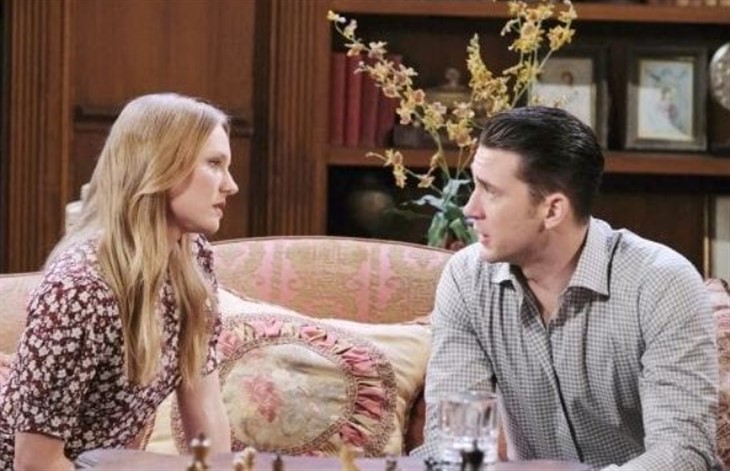 Days of Our Lives (DOOL) spoilers suggest that in Salem Abby Dimera (Marci Miller) could be about to return to Salem after she walked out on her cheating husband a few months ago. Chad Dimera (Billy Flynn) wants his wife back but has he blown any chance of salvaging their relationship?

Days of Our Lives Chad cheated on Abby with what was the nanny at the time. However, it was later revealed that Chad had slept with Abby’s half-sister, Gwen Rizczech (Emily O’Brien). Gwen came to town to destroy Abby’s family and she just about succeeded in doing that. However, Abby’s parents made up although Jennifer Deveraux (ex-Cady McClain) is currently out of town after her mother’s shocking death at the hands of Gwen. Although Gwen convinced everyone it was an accident, Jennifer still holds the fact that Jack Deveraux (Matthew Ashford) had a love child against her. Jennifer was very upset when Gwen targeted Abby for revenge when she had nothing at all to do with Gwen not knowing her father. Abby also did not have Jack in her life all of the time either. Abby decided to follow in her mother’s footsteps and get away as well. Does Abby want to come home and save her marriage?

Days of Our Lives Chad has made some mistakes. However, Chad does love his wife and wants her to come home. Unfortunately, Abby may have other plans after thinking about Chad’s infidelity all this time. Abby could have decided that her marriage cannot be saved and completely walk away from Chad and all things Dimera. Abby wants her children to have a relationship with their father but Chad has not shown Abby the love he should have for years now. Chad even took Abby’s young daughter and gave her to his brother when he had her put into a mental facility right after her daughter was born. Chad hasn’t believed Abby when she told him she was being set up and has seriously damaged her trust in him. Can Abby ever trust Chad enough to come back to him?

Abby has had several bouts with mental health issues but she has been doing much better. Unfortunately, Chad doesn’t believe Abby when she tries to tell him she is ok. Chad doesn’t even give Abby the benefit of the doubt anymore but instead is ready to have her locked away. Has Chad learned his lesson? Does Abby love Chad enough to try again?