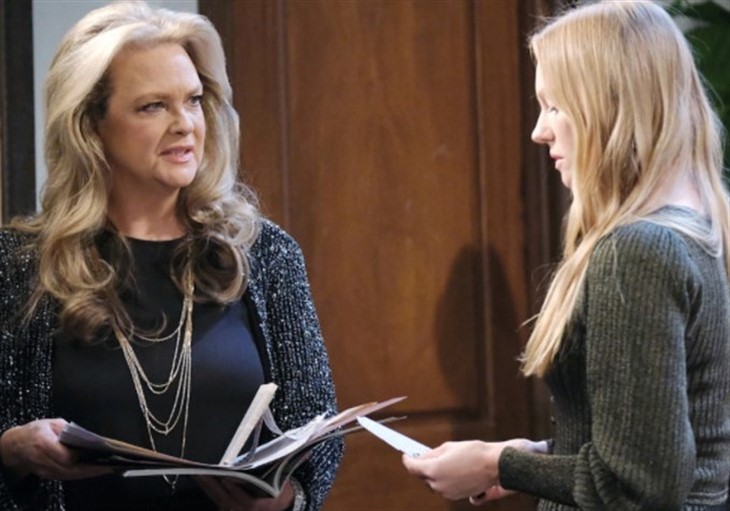 Days of Our Lives (DOOL) spoilers reveal that in Salem Gwen Rizczech (Emily O’Brien) wanted to destroy Abigail DiMera (Marci Miller), including tearing apart her marriage. She has done that and Abigail doesn’t know how to forgive Chad DiMera (Billy Flynn). However, “Chabby” might still have a chance. Anna DiMera (Leann Hunley) steps in, but will Abigail take her advice?

DOOL spoilers reveal that Gwen made a deal with Chad, but she went ahead and told Abigail about her husband’s betrayal. Abigail is furious and her head is spinning. She can’t believe that all these months, she was the one defending herself every single time Chad accused her of sleeping with Jake Lambert DiMera (Brandon Barash). However, Abigail was the faithful one and the accuser is the one who betrayed their marriage vows.

Abigail will need some time away from Chad to process everything. It is teased that she takes the children and moves out of the DiMera mansion. Meanwhile, Chad takes action and tries to find out the truth about Gwen. He goes to talk to Dr. Wilhelm Rolf (William Utay), who eventually reveals Gwen’s secret. Armed with this information, Chad goes to tell Abigail what Gwen’s goal really is, but how will she respond?

Days of Our Lives spoilers reveal that Anna will try to help Abigail by giving her marriage advice. Remember, Anna was pretty much the only one that really knew Gwen was up to no good. She tried to warn Abigail that the nanny was not her friend and was not as nice as she appeared. Abigail had a hard time believing this until recently when her entire life came under attack. So, Anna will probably explain to Abigail that she’s giving Gwen exactly what she wants by leaving Chad. However, they aren’t going to defeat Gwen by coming apart. “Chabby” needs to stay together and stand strongly united.

It’s not clear if Abigail will take Anna’s advice. However, we do know from head writer Ron Carlivati that he likes to tear couples apart only to eventually bring them back together again. For the scribe, it’s all about the process and the journey. He hinted that Chad and Abigail could end up getting back together. Actress Marci Miller also teased that there might be hope for the couple, but only after a lot of time and hard work.

But it’s not just about Chad and Abigail. Now they have the additional complication of Gwen trying to ruin their lives. Will they be able to overcome everything the manipulator throws at them? We will have to keep watching the NBC soap opera to find out.