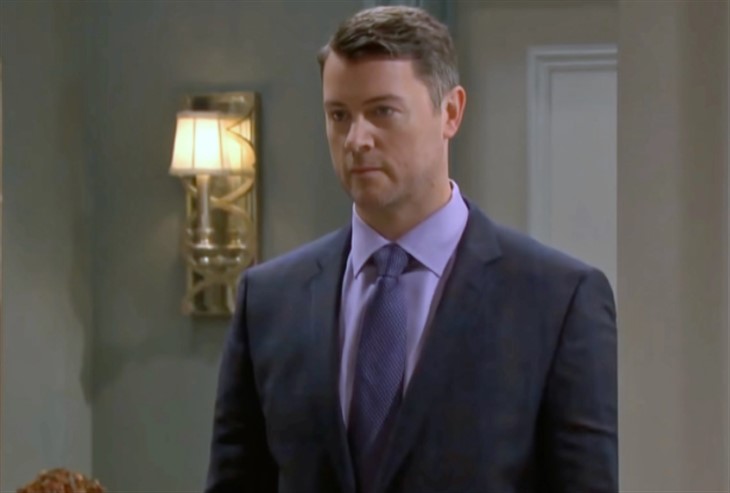 Days of Our Lives (DOOL) spoilers tease that EJ DiMera (Dan Feuerriegel) will team up with Chad and Tony DiMera (Billy Flynn, Thaao Penghlis) to overthrow Jake DiMera (Brandon Barash) as CEO of DiMera Enterprises in future episodes of Days of Our Lives!

Days Of Our Lives Spoilers – EJ DiMera Returns To Salem To Fix His Marriage, But Also To Fix DiMera Enterprises

Days of Our Lives viewers will recall that recently, Sami DiMera (Alison Sweeney) and Lucas Horton (Bryan Datillo) were blackmailed by Kristen DiMera (Stacy Haiduk) to keep Chloe Lane (Nadia Bjorlin) away from Brady Black (Eric Martsolf). Kristen threatened to tell Sami’s husband, and her half-brother by adopting EJ DiMera about the affair. Then, when they failed to keep Chloe away from Brady, Kristen paid Xander Kiriakis (Paul Telfer) to kill them down in the DiMera wine cellar where she’d locked them up, but Sami offered a cash-strapped Xander twice the amount Kristen offered him to kill them to save their lives.

Days of Our Lives viewers will recall that she called EJ for an emergency cash transfer into Xander’s account, and he wired it in immediately but almost as quickly put a stop payment on it! She had told him it was a matter of life and death – but it sounds like this situation, which thankfully Sami and Lucas managed to get out of with the arrest and then flight on the run of Kristen, was solved. Xander didn’t care about killing them or obedience to Kristen, and eventually found another place to live. However, Sami’s cry for help at the threat of death also may have prompted EJ to come to Salem to fix his marriage and find out how in the world his wife had gotten herself into so much trouble! He also brings their son Johnny DiMera (Carson Boatman) along.

DOOL Spoilers – EJ DiMera Has Two Reasons For His Return

Days of Our Lives viewers will find that EJ will have two reasons for his return – not only to fix his marriage with Sami if indeed it is fixable at all but also to fix DiMera Enterprises! He will team up with Chad and Tony to take back their father’s company from Jake DiMera, who seems to be doing a passable job. Chad always had a problem with Jake, who is rough-hewn and not from the business world nor even as skilled in business as his late twin, Stefan DiMera (Brandon Barash) who grew up as corporate raider Sam Maitlin!

Days of Our Lives viewers will recall that Jake came as a mechanic who had no idea that he had an identical twin – as Stefan had not either – until their mother, Vivian Alamain (Linda Dano) found out that her manservant of many years, Ivan Marais (Ivan G’Vera) had never told her she had twins and that not only Stefan but “Jacob” as she calls him had been given up for adoption as well!

Despite EJ’s humble birth mother Susan Banks (Stacy Haiduk) having had some influence on him, EJ strove through his life to become classy and refined as a proper DiMera should – and Chad also knew Stefano DiMera (Joseph Mascolo) growing up. Neither Stefan nor Jake ever knew their birth father. Chad and EJ developed a strong bond, and Tony after he was found to be alive all bonded to his younger brothers as well. When Tony and Anna DiMera (Leann Hunley) came to Salem the last time, he had been vehemently against the classless Jake being at the helm although he and Anna have had their disagreements over his running DiMera Enterprises, which she has always been against. EJ will undoubtedly invoke DiMera’s family loyalty when he recruits both Chad and Tony to overthrow Jake!

Kate Middleton May Be Away From Her Kids, but She Sweetly Holds Them Close To Her Heart