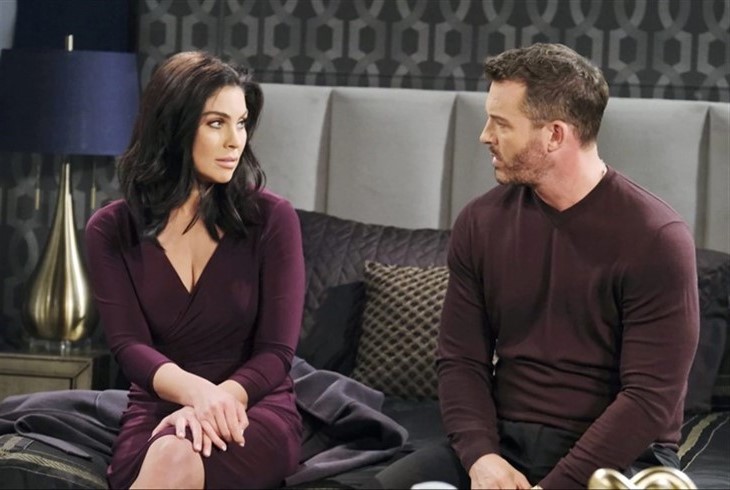 DOOL spoilers for Monday reveal that Chloe Lane (Nadia Bjorlin) is horrified when she finds Brady Black (Eric Martsolf). Unconscious and appearing to have relapsed, Chloe believes he’s severely injured as he’s covered with blood. However, the blood doesn’t belong to Brady.

On Tuesday, Roman and Kate will get a surprise visit from Rex Brady (Kyle Lowder). Chad admits to Abigail his growing frustration with EJ DiMera (Dan Feuerriegel). Jake and Gabi attempt to up the ante with Victor in order to get what they want. Plus, Shawn Brady (Brandon Beemer) comes across new evidence. Shawn and Chloe both fear that the evidence indicates Philip Kiriakis (Jay Kenneth Johnson) is dead.

Days of Our Lives spoilers for Wednesday reveal that Lucas Horton (Bryan Dattilo) tries to save Sami. Ava Vitali (Tamara Braun) is on edge when she gets a visit from EJ while Paulina opens up to Kate. Also, Chad and Abigail are questioned by Rafe regarding Kristen’s escape.

On Thursday’s episode, Sami will get a huge shock. EJ questions Nicole Walker (Arianne Zucker) about her feelings for Rafe. Brady is interrogated by Chloe regarding Philip’s disappearance. Plus, Shawn gets help from Belle Brady (Martha Madison) in solving a puzzle.

On Friday, Sami opens her bedroom door to find EJ and Nicole in bed together. Shawn will be stunned when more evidence indicates Brady killed Philip. Chloe tells Brady that she isn’t convinced of his innocence, which leaves him heartbroken. Meanwhile, Victor and Kate will find out that Philip is officially a missing person.

Which storyline are you looking forward to seeing the most during the week of December 6? What do you predict is going to happen with the residents of Salem? Did Brady really kill Philip or is this a frame job? How will Sami react after she finds EJ and Nicole in bed together? Keep watching the NBC soap to find out what happens next.