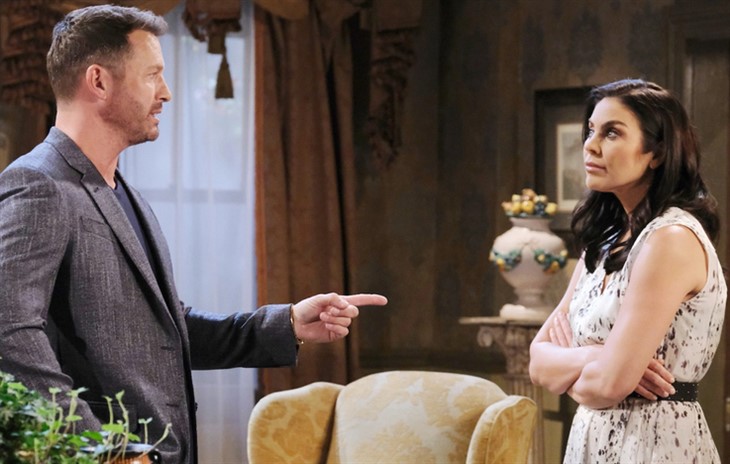 Days of Our Lives spoilers reveal that Chloe Lane (Nadia Bjorlin) searches for Philip Kiriakis (Jay Kenneth Johnson), who has gone missing. Chloe doesn’t find him, but does stumble upon Brady Black (Eric Martsolf). Covered in blood with a knife, Chloe fears that Brady has done the unthinkable. Find out what to expect when this scene airs during the week of December 6.

DOOL spoilers reveal that Chloe went to grab some food and bring it back to Philip. However, when she returned to the Kiriakis mansion, Philip was nowhere to be found. Nobody has seen Philip and Chloe starts to get concerned. In the new issue of Soap Opera Digest, it is confirmed that Chloe doesn’t find Philip, but does come across Brady at the riverbank.

When Chloe stumbles upon Brady, he is covered with blood. At first, Chloe fears that Brady has been injured. However, the blood doesn’t appear to be coming from Brady as he doesn’t have any major injuries. Brady has no memory of how he got there and the night before is nothing but a blur. Martsolf explained,

“Chloe finds Brady all bloody and boozed up. He comes to, but he’s in a state of pure confusion and doesn’t know how he got there or why he’s in the state that he’s in. Everything is an absolute blur.”

Days Of Our Lives Spoilers – Blood, Knife And Phone

Days of Our Lives spoilers reveal that not only is Brady covered in blood, but there is a knife laying nearby. Brady has no clue what happened, but Chloe fears the worst. Everyone in Salem knew about Brady and Philip’s war over Chloe’s heart. So, Chloe assumes that the two had a major confrontation and things got violent.

Brady is taken to the hospital where tests are run on the blood. Kayla Johnson (Mary Beth Evans) comes back with the results and says the blood doesn’t belong to Brady. When she mentions the blood type, Chloe confirms that Philip has that same blood type. Then, a phone rings and in Brady’s pocket there lies Philip’s cell phone. Brady claims he has no clue why Philip’s phone would be in his pocket.

Shawn Brady (Brandon Beemer) is called in to investigate. As Shawn gathers the little information that is available, Kayla reveals that Brady’s test results show he was intoxicated. However, Brady denies ever having a drop of alcohol. Martsolf said of the scene,

“Brady’s very frustrated. Things look really bad and it’s driving a giant wedge into their newfound trust and affection for one another. It’s creating a giant obstacle in their relationship.”