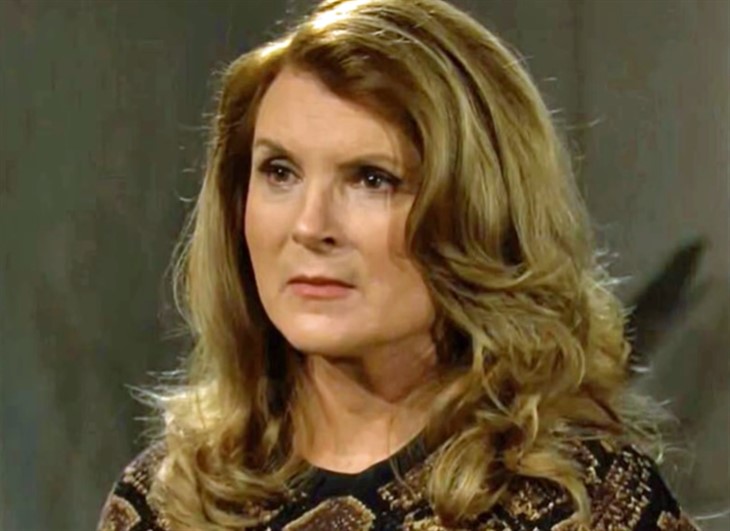 B&B spoilers for Monday reveal that Ridge Forrester (Thorsten Kaye) drops a bombshell on Brooke Logan Forrester (Katherine Kelly Lang). As Brooke gave Deacon permission to be on the property, Ridge delivered an ultimatum to Hope. When Ridge tells Brooke about his ultimatum to Hope, she will be stunned. The last thing Brooke wants is for Hope and the children to move off the property.

Over in Sheila’s hotel room, Deacon will share his vision for the future. Sheila is already jealous of Deacon’s progress with Brooke and Hope. So, the last thing Sheila wants to hear are details regarding Deacon’s family fantasies.

On Tuesday’s episode, Sheila will continue to get even more frustrated with Deacon’s fixation on Brooke. Sheila could decide to take matters into her own hands. Meanwhile, Ridge and Brooke will battle it out over Deacon and Hope. There is no way Brooke is going to accept Ridge giving Hope an ultimatum as the one delivered on Friday. There is also no way that Ridge will accept Deacon being on the property.

It is teased that will find that they are deadlocked and it could mean another separation.

The Bold and the Beautiful spoilers for Wednesday reveal that Liam doesn’t know what to do about Hope’s fascination with Deacon. Liam fears that he’s fighting a losing battle with Hope. As Liam and Bill have lunch together, the two will discuss the Deacon dilemma. Bill has some advice on how Liam should proceed. However, the last time Liam took his father’s advice, he nearly went to prison.

Meanwhile, Ridge will talk to his children about what’s happened with Brooke and Deacon. Steffy Forrester Finnegan (Jacqueline MacInnes Wood) and Thomas Forrester (Matthew Atkinson) will rally around Ridge.

On Thursday, Hope and Deacon will put Brooke on the spot. As for Ridge, he will get emotional as he goes down memory lane with Thomas and Steffy. It is teased that there will be flashback scenes with Taylor. Steffy will tell her father that Brooke has only brought him heartache while he was the happiest with Taylor.

On Friday, Sheila’s jealous spirals out of control as Deacon celebrates a huge victory. Meanwhile, Taylor returns to Los Angeles and has a joyous reunion with Steffy.