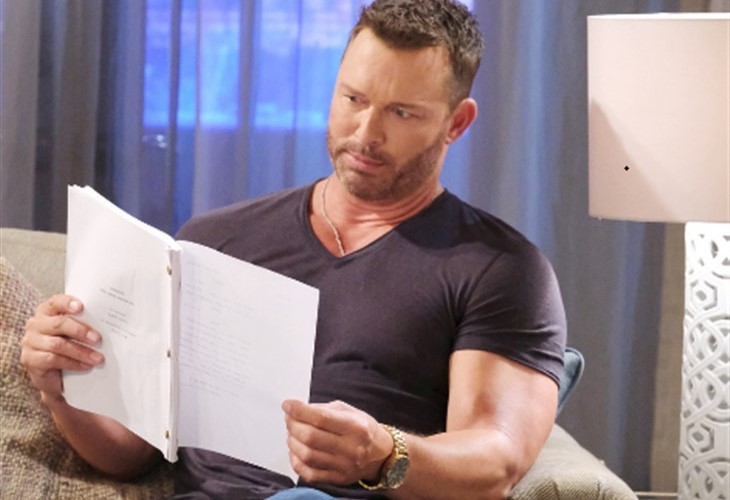 Days of Our Lives spoilers reveal that Brady Black (Eric Martsolf) is accused of brutally attacking Philip Kiriakis (Jay Kenneth Johnson). At the least, the police suspect assault, and at the worst, murder. While Philip remains missing, the evidence continues to stack against Brady. Not only does Chloe Lane (Nadia Bjorlin) think Brady’s guilty, but mourns Philip’s alleged death.

DOOL spoilers reveal that Chloe searches for Philip, who has mysteriously vanished. As fans saw on Thursday’s episode, someone smacked Brady in the head with a crowbar. It is stated that Philip is the one who viciously attacks Brady. Then, Brady’s body is dragged away, presumably to the riverbank. That is where Chloe makes a horrifying discovery.

Brady regains consciousness and has no idea how he ended up at the riverbank. He is saturated with blood and there is a knife nearby. Chloe finds Brady all boozed up, but he insists that he hasn’t been drinking. Martsolf told Soap Opera Digest,

“Brady is almost belligerent in his denial. He’s really frustrated. He’s been sober for a long time and has worked very diligently on his sobriety. The idea that this would have happened [attacking Philip] and he would have no clue whatsoever is completely foreign to him.”

Days of Our Lives spoilers reveal that Kayla Johnson (Mary Beth Evans) confirms Brady has alcohol in his system. Kayla also tests the blood that Brady is covered in and there are no wounds. The blood isn’t Brady’s, but does have the same blood type as Philip. This has Chloe worrying that Brady could be responsible for Philip’s disappearance and that he might be dead.

Chloe calls Philip and imagine everyone’s surprise when the ringing comes from Brady’s pocket. It is indeed Philip’s phone that is ringing, although Brady claims to not have any idea how it got there.

Shawn Brady (Brandon Beemer) investigates the mysterious case. Shawn shows Chloe the knife that was found at the crime scene. Chloe tells Shawn all about the war between Brady and Philip. This makes Brady the prime suspect and police comb through the riverbank looking for more clues. That is when Philp’s prosthetic leg is found, which leads to Eli Grant (Lamon Archey) placing Brady under arrest.

It is teased that during the next two weeks, Shawn will be stunned to find that even more evidence points to Brady killing Philip. Is there any possiblity of Brady being cleared, or could he have really committed murder?