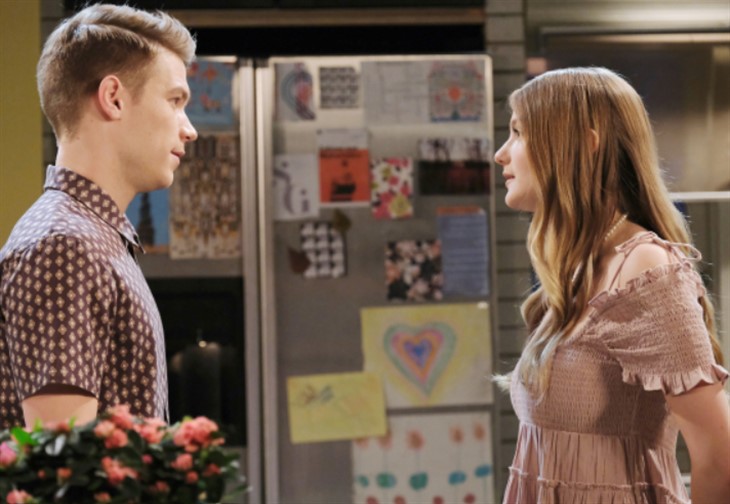 Days of Our Lives (DOOL) spoilers for Wednesday, November 3, 2021, reveal the undead still walking around Salem thanks to MarDevil’s machinations. And Allie Horton is getting the brunt of things.

Halloween was just the beginning of what will probably be the creepiest holiday season Salem has ever seen since the last time The Devil possessed Marlena Evans (Deidre Hall) and began desecrating churches. Now, Marlena’s granddaughter, Allie (Lindsay Arnold), is suffering at the hand of one of MarDevil’s undead creations as Charlie (Mike Manning) seeks revenge on Allie for tarnishing his name — and keeping him from his son.

Tripp Dalton (Lucas Adams) walks in on his evil undead brother torturing Allie and they both have to do battle against this dark spirit. Little do they know that Allie’s sweet grandmother unleashed this upon them.

Gabi Hernandez (Camila Banus) is having her own undead issue with Nick Fallon (Blake Berris) convincing her that he killed Jake DiMera (Brandon Barash) and buried his body somewhere near them. It’s not like she hasn’t killed Nick twice already — will she have to do it a third time to find the man she loves? At least Nicole Walker (Arianne Zucker) killed Deimos (Vincent Irizarry) again so that problem is taken care of. Now, Nicole has another problem — well, sort of.

Nicole certainly looks crazy to Rafe Hernandez (Galen Gering) now that Deimos Kiriakis’ body is gone after she went and told Rafe he was right there and she killed him once again. Rafe wonders if something is wrong with Nicole and tries to comfort her as she becomes absolutely hysterical.

That’s when one thing leads to another and the pair end up doing the deed on a conference room desk. Are we supposed to believe we have 1990s John (Drake Hogestyn) and Marlena here because we really don’t? It’s Rafe and Nicole and not too many people even want to see them together. Does that mean Nicole has now opened a portal for The Devil to visit her, too? Armoire, anyone? Stay tuned to Days of Our Lives weekdays to see how these stories play out.