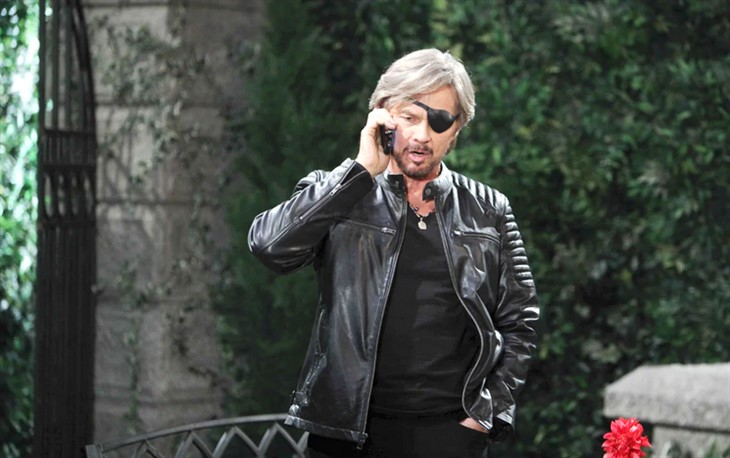 Days of Our Lives spoilers reveal that Steve “Patch” Johnson (Stephen Nichols) and Kayla Johnson (Mary Beth Evans) are suspicious. John Black (Drake Hogestyn) is allegedly out of town on a case, but Steve knows that Marlena Evans (Deidre Hall) isn’t being honest. Steve decides to investigate, but will he find John before it’s too late?

DOOL spoilers reveal that John confronted Marlena and discovered his instincts were deadly accurate. When John heard the devil’s unmistakable voice, he tried to call out to the real Marlena. John knows that even though the devil has full control, the real Marlena is still in there somewhere. Unfortunately, the devil played a game with John before knocking him unconscious.

The devil was going to kill John but Marlena used all of her strength to stop it. So, the devil is keeping John alive, but chaining him in the DiMera crypt. Satan plans on trying to break John down and corrupt his soul.

While John is chained in the DiMera crypt, Marlena has to give an excuse to explain his disappearance. “MarDevil” tells everyone that John had to leave Salem to work on a case. However, that doesn’t make sense to everyone, including his business partner, Steve. Remember, John and Steve are both partners in B23ooagsasssssazgoo0isy0-ye  lack Patch. So, for John to work on a case that Steve knows nothing about makes zero sense.

Days of Our Lives spoilers reveal that Soap Opera Digest published what fans can expect during November sweeps. It is teased that Steve smells a rat and decides to investigate.

“John has vanished and Marlena has told everyone that John is out of town on a case. Since Steve is his partner, this sort of raises Steve’s antennae right away. Steve smells a rat here. So while John is chained up and going through his ordeal, we have on the other side, Steve and to some extent, Kayla, trying to figure out what happened to John exactly. So Steve’s on the case.”

While Steve investigates and John tries to survive his ordeal, “MarDevil” will be creating chaos and catastrophe throughout Salem. It’s possible that Steve might find some clues that lead him to John. If Steve talks to Eli Grant (Lamon Archey), he will realize that John was going to meet Marlena and Julie Williams (Susan Seaforth Hayes) at St. Luke’s. Even though the attack happened after John sent Julie to the hospital, there will be a clue.

Marlena dragged John away but didn’t flip the cross on the wall back to its rightful position. So, unless it happened off-screen, this could be the clue that sets Steve on the path to saving John from the devil – but will Steve end up a victim too?

90 Day Fiancé: Why Can’t Sumit Move To America With Jenny