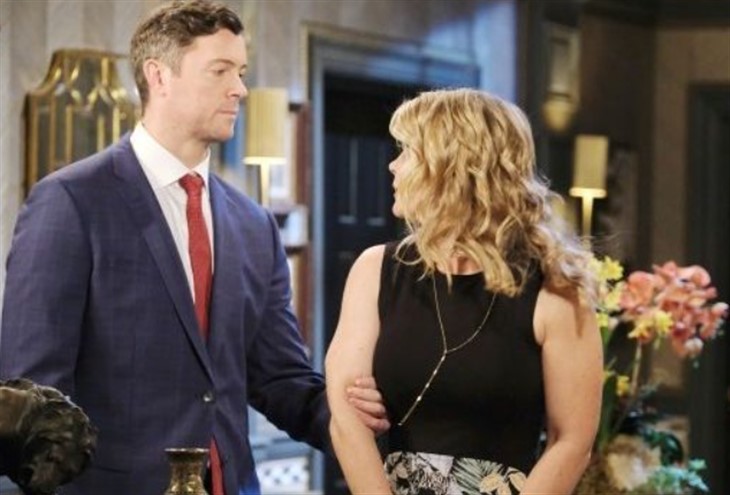 Days of Our Lives spoilers reveal that Sami DiMera (Alison Sweeney) finds herself falling in love with EJ DiMera (Dan Feuerriegel) all over again. They even make love during the Fourth of July. Sami has her marriage back after waiting so long for EJ to get back to his old self. However, her marriage may completely fall apart just when it’s coming together due to a triple threat.

Days Of Our Lives Spoilers – Not Giving Up On Marriage

DOOL spoilers reveal that Sami’s marriage hasn’t been right in a long time. After EJ was shot by Clyde Weston (James Read), he died. Then, Sami kept getting “clues” that led her around the world. Eventually, she found EJ and he was in a facility trying to recover. It didn’t seem like he would ever get better. However, seven years later and he is back to his old self.

Before he came to Salem, he was distant and disconnected from Sami. This made her feel very alone and she ended up turning to Lucas Horton (Bryan Datillo). Sweeney previously told Soap Opera Digest that despite feeling alone for so long and falling out of love with EJ, Sami couldn’t give up. She spent way too much time focused on helping him recover.

Sami and Lucas were rekindling their former romance when EJ suddenly showed up in Salem. Lucas wanted them to try having a relationship again, but Sami didn’t feel the same way. Some fans think it’s denial and others believe that she truly does love EJ. When EJ showed up, he promised to be a better husband and so far, Sami feels bonded with her husband again.

Days of Our Lives spoilers reveal that in the new issue of SOD, Sweeney explained Sami’s current feelings. She said that Sami can’t help but fall in love with EJ all over again. They have their marriage back, just like she had been hoping for so long. They will even become intimate, which is something they haven’t done in a very long time. Of course, when things are starting to go Sami’s way is when they are actually falling apart.

There is a triple threat that could destroy Sami and EJ’s marriage. First, there is Kristen DiMera (Stacy Haiduk). She wrote a letter to EJ telling him about “Lumi,” which Sami destroyed. When Kristen doesn’t hear from EJ, she will call him and will probably bring up Sami’s affair.

The second threat is Nicole Walker Brady (Arianne Zucker). She is starting to realize that Xander Cook (Paul Telfer) might be right about “Lumi.” She also has Brady Black’s (Eric Martsolf) promise to help her despite being family to Sami. Nicole will also get assistance from Ava Vitali (Tamara Braun) and Chloe Lane (Nadia Bjorlin). In fact, Nicole will tell Lucas that she suspects that he slept with Sami. She will be hoping to get a confession, but would he really confirm it? If she had proof, she would already be shoving it in EJ’s face to “win” this battle.

We also have Jake DiMera (Brandon Barash) and Gabi Hernandez (Camila Banus). “Jabriella” read the letter from Kristen before Sami negotiated to get it back. Even though they returned the letter to Sami, they now know the truth. With them pretty much losing everything, could they try to use “Lumi” in order to gain the upper hand? It’s entirely possible. We will have to keep watching the NBC soap to find out what happens with this storyline.