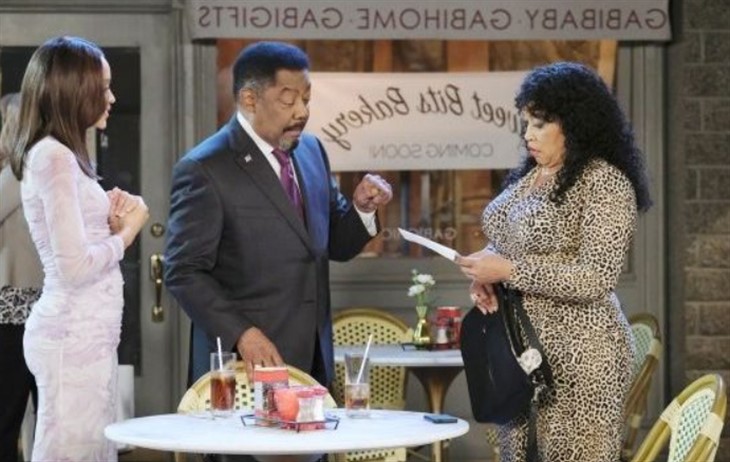 Days of Our Lives (DOOL) spoilers reveal that it has been teased for weeks that Paulina Price (Jackée Harry) had secret plans for Horton Town Square. She’s tearing down the entire square to build her own store, PriceMart. Abe Carver (James Reynolds) is furious Paulina used him just to put more money in her pocket. Reynolds explained the storyline and what comes next.

DOOL spoilers reveal that Lani Price Grant (Sal Stowers) was nervous when Abe first mentioned spending time with Paulina. She didn’t want her father getting too close or attached to the woman. Paulina was in Miami at the time, which Lani suggested was a lie. In Lani’s experience, Paulina often says one thing and does something completely different. Well, Paulina was telling the truth about her location, just not what she was doing there.

More recently, Lani gave her father another warning about Paulina. However, he seemed so happy to have found romance again. She ended up giving Abe her approval. Now she is regretting it.

What is the saddest about Paulina’s deception is what she did to her own daughter. Chanel Dupree (Precious Way) was so excited about starting her own business. She put a lot of time, energy and thought into Sweet Bits. When the city approved Chanel’s application, Paulina was upset. She wanted to know why Abe didn’t stop her. When he mentioned that when someone like Chanel finally finds their passion, it’s important to support it. He believed in her, even if her own mother didn’t.

Eventually, Paulina seemed to accept that Chanel was starting a bakery. She was supposed to get one of the suits in Horton Town Square. With Paulina ordering the entire structure to be demolished for a store named after herself, there will be no room for any tenants. This includes her daughter’s bakery.

Days of Our Lives spoilers reveal that Reynolds spoke to Soap Opera Digest about the storyline. It seems that Abe will be facing more than just heartbreak and betrayal. The actor explained that Paulina’s actions could end up costing Abe his job as mayor. The city could force him out of office.

“… she has used Abe, basically, as the go-between her and the city in order to get certain tax breaks and zoning breaks to make it easier for her to build… he explodes when he has been wronged. He’s the mayor of this city and she put him in a position where he could have been kicked out of office! Abe’s political career could be going up in smoke…”

Obviously, Abe breaks off his relationship with Paulina. She asks for a chance to explain but Abe isn’t interested in hearing anything she has to say. In his mind, she used him just to pad her pocketbook. She even deceived her own daughter, which shows Abe just how little she cares for her family. As fans know, having a moral compass and putting family first are priorities in Abe’s book.

Now he has to find a way to stop the demolition. He also needs to do damage control with the Salem residents and provide an explanation to the city. Will Paulina’s greed end up costing Abe his career?

Are 90 Day Fiancé Stars Jenny And Sumit Unable To Move To USA?