Days Of Our Lives Spoilers: Eric Brady Is Ready For An Exorcism 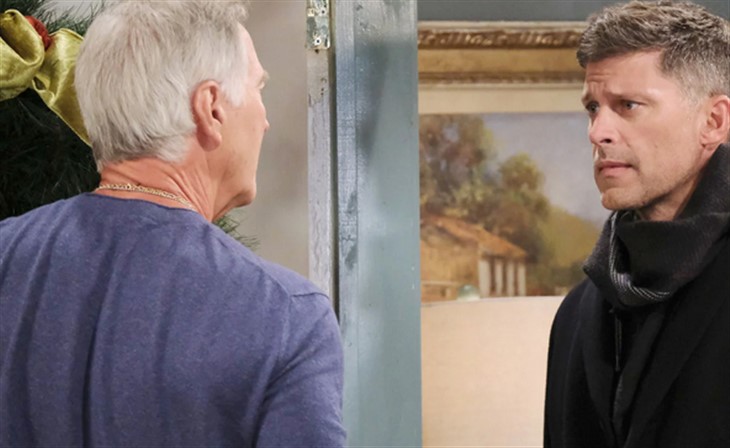 Days of Our Lives (DOOL)  spoilers all hell breaking loose once again in Salem — quite literally — all because of one satanic possession.

Days Of Our Lives Spoilers – Good Vs. Pure Evil In Salem

Somehow with the help of God and probably an angel named Gabriel, John Black (Drake Hogestyn) managed to subdue MarDevil (Deidre Hall) and tie her to their bed, but will that really work when MarDevil has such amazing powers. John sure hopes so now that he had some amazing powers as well.

John knows an exorcism has to happen but he hasn’t been a priest in decades and wasn’t even a full priest the last time this happened to Marlena. So, he calls in the big guns from Africa and Eric Brady (Greg Vaughan) comes home in a priest collar. Did he really go back to the priesthood or is he just doing this temporarily to save his mother.

Either way, MarDevil thinks she can just tempt Eric in the same way she tried to tempt John — by morphing into OG Kristen DiMera (Eileen Davidson). Somehow Kristen just has all these womanly wiles that these men of the cloth — or former men of the cloth — just can’t seem to resist. OG Kristen didn’t make John break, but can she make Eric break? After all, she managed to seduce him once before and that ruined her chance of ever marrying Brady Black. (Although the other Kristen somehow managed to have his baby.)

Nicole Walker (Arianne Zucker) is also stunned that Eric has returned to town just when her life is at a crossroads once again. She’s been sleeping with whomever she can this year. From Xander Kiriakis (Paul Telfer) to Rafe Hernandez (Galen Gering) to EJ DiMera (Daniel Feuerriegel), Nicole has been doing anything to forget the fact that her heart hurts and she misses Eric.

Yes, they said it was over the last time Eric was in town but if Eric has gone back to the priesthood, then it is really, really over and that’s something Nicole has to face. Will she decide to sleep with Rafe again just to forget her feelings since EJ is off the market once again?

And then there is MarDevil, who thinks she has something on Lucas Horton (Bryan R. Dattilo) and she does. She knows Lucas is the one who had Sami Brady (Alison Sweeney) kidnapped, but did she possibly have some influence over Lucas’ piss-poor decision-making process? Stay tuned to Days of Our Lives weekdays to see how these stories play out.