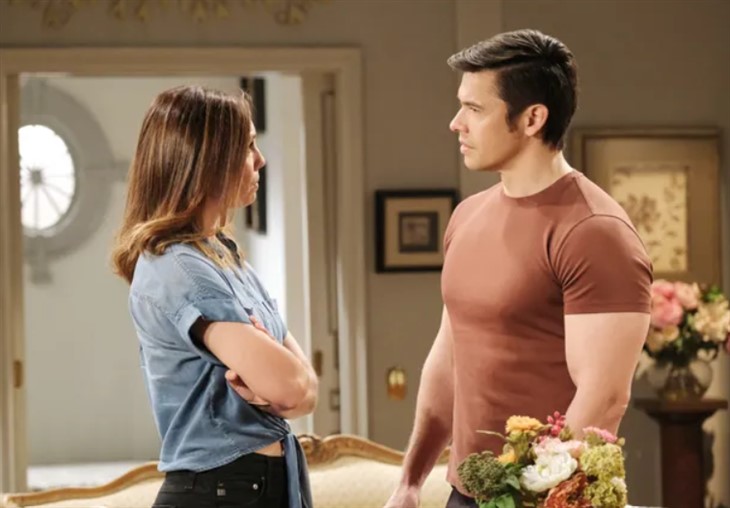 Days of Our Lives (DOOL) spoilers reveal that Xander Cook (Paul Telfer) realizes that Sarah Horton (Linsey Godfrey) didn’t break his heart and leave with Rex Brady (Kyle Lowder). However, Xander also realizes that Gwen Rizczech (Emily O’Brien) has been there for him. Xander proposes, but will Gwen’s wedding blow up when Sarah returns and objects to the marriage?

Days Of Our Lives Spoilers – Searching For Sarah Horton

DOOL spoilers reveal that Xander, Rex, and everyone else realizes that something is very wrong with Sarah’s exit from Salem. All of this time, everyone thought that Sarah left town with Rex. However, now that Rex has come back and told everyone that isn’t true, the search is on. Maggie Horton Kiriakis (Suzanne Rogers) asks Abigail DiMera (Marci Miller) for help.

Meanwhile, Xander also wants to find Sarah but that doesn’t mean he’s done with Gwen. For him, it’s complicated until he makes a realization.

Even though Xander and Sarah were going to be married, the relationship was an odd one. Sarah was Salem’s good doctor while Xander was a semi-reformed bad boy. It seemed as if Sarah treated Xander like a kid instead of a life partner. In fact, Sarah wanted to change Xander whie Gwen accepts him for who he is.

Xander makes a realization that the one person who has been by his side through everything is Gwen.

Days of Our Lives spoilers reveal that head writer Ron Carlivati spoke to Soap Opera Digest about what to expect in 2022. It is confirmed that Xander proposes to Gwen.

“Even though these questions start to bounce around about Sarah, Xander realizes the person that has been there for him this whole time, and maybe is his possible soul mate, is Gwen. So Xander proposes to Gwen, which of course is wrapped up in this search for Sarah.”

Assuming that Gwen is able to keep her secret until the day of her wedding, when and how does the truth come out? Since soaps are all about drama, especially with Salem weddings, could there be an unexpected return? Is it possible that Sarah crashes Xander and Gwen’s wedding with a shocking bombshell? How will Gwen explain keeping this huge secret from Xander and what does it mean for Sarah’s future? We will have to keep watching the NBC soap to find out!