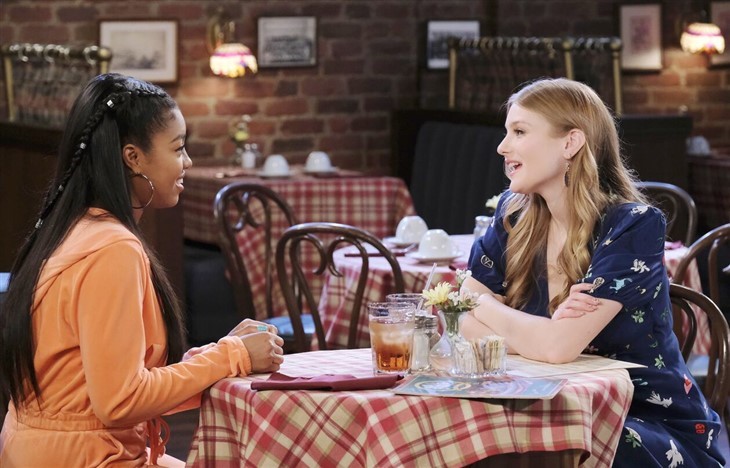 Days of Our Lives spoilers reveal that Johnny DiMera (Carson Boatman) and Chanel Dupree (Raven Bowens) continue announcing their surprise marriage. The next people they tell are Tripp Johnson (Lucas Adams) and Allie Horton (Lindsay Arnold). However, Chanel is devastated when Allie spews a bunch of lies about Chanel’s reason for tying the knot.

DOOL spoilers reveal that Johnny and Chanel have returned from their trip to Italy. When they returned to Salem, Johnny and Chanel made a shocking announcement to their parents. While the couple hoped that they would get support and happiness, they received just the opposite. EJ DiMera (Dan Feuerriegel), Sami DiMera (Alison Sweeney), and Paulina Price (Jackée Harry) didn’t approve and refused to give their blessing.

Paulina later decided to take a different approach to Chanel’s marriage. However, it doesn’t mean she approves. Paulina has already lost one daughter and doesn’t want to lose the other.

Despite Johnny and Chanel’s parents being disappointed in the marriage bombshell, the couple has no plans to get an annulment. In fact, Johnny doesn’t care if EJ cuts him off financially. Johnny is in love with Chanel and plans on staying married to her. Despite their parents’ disappointment and discouragement, Johnny and Chanel will continue sharing their news with others in Salem.

Days of Our Lives spoilers reveal that when Johnny and Chanel tell Tripp and Allie their news, they once again are surprised by the reaction. Tripp probably doesn’t say much, but Allie has plenty to say. Actress Raven Bowens explained Allie’s reaction to Soap Opera Digest.

“Chanel is disappointed because nobody seems to be supporting this bliss that she feels. It’s surprising and devastating because this is her best friend. [Allie makes things worse] by saying a bunch of lies as to the reasons why she’s against this marriage.”

Johnny steps in and accuses Allie of being jealous. Johnny adds that the only reason Allie is mad is that she wants Chanel for herself. However, Allie denies the allegation.

After Johnny and Chanel leave, Allie regrets how she reacted to Chanel’s news. Allie and Tripp decide to go to the DiMera mansion and make things right with Chanel and Johnny. Since it’s New Year’s Eve, Allie and Tripp come over with champagne. However, something ends up happening during the festivities that Chanel could never have predicted.

What do you think ends up happening on New Year’s Eve that completely blindsides Chanel? Does Allie get tipsy and plant a kiss on her newly married best friend and business partner? Or could John Black’s (Drake Hogestyn) exorcism fail, leaving one of the four friends to be possessed by the devil?