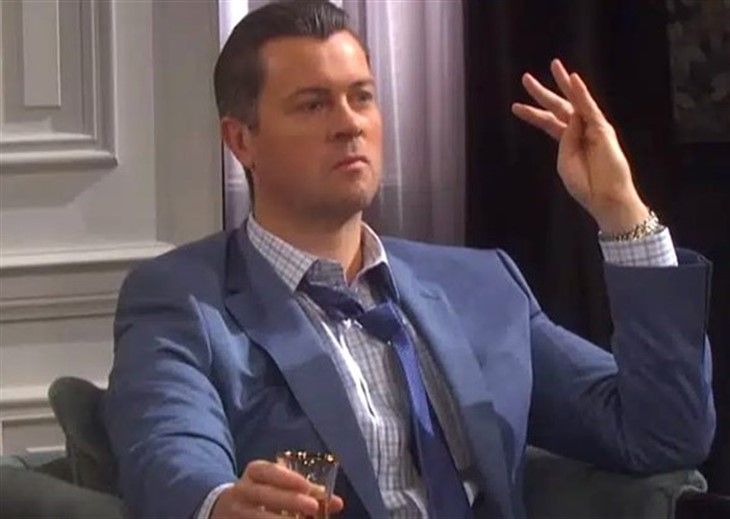 Days of Our Lives spoilers tease that EJ DiMera (Dan Feurreriegel) is going to spend the night in lockup for Sami DiMera’s (Alison Sweeney) kidnapping after the real culprit, Lucas Horton (Bryan Datillo) frames him for Sami’s kidnapping in an upcoming episode of Days of Our Lives!

Days Of Our Lives Spoilers – Lucas Confessed The Kidnapping To Philip

She thought maybe EJ was responsible, since the kidnapping had taken place right after he kicked her out of the DiMera mansion and she was seeking shelter at Rafe Hernandez’ (Galen Gering) house! Now that Lucas has confessed to his Brady Black (Eric Martsolf) framing brother Philip about his own crime, it probably gave him some ideas about framing someone for the kidnapping and that perfect someone would be EJ! Lucas had talked to his brother about how no matter what he had done, Sami seems obsessed with EJ, who had done nothing but always hurt her. Sami was still trying to get back together with EJ, even after finding him in bed with her arch rival Nicole Walker (Arianne Zucker) immediately upon returning to Salem!

DOOL Spoilers – Lucas Has The Perfect Christmas Present For EJ

Days of Our Lives viewers will see that Lucas has the perfect Christmas present for EJ, and times his frame just right so he’ll be in jail on Christmas Eve! Lucas will never give up on getting Sami back, who he has realized is his one true love over the years, and he’ll ho-ho-hope to get her back for good after framing her egotistical husband for her kidnapping!

Days of Our Lives viewers suspected that it may have been either Lucas or EJ who had kidnapped Sami, with Lucas doing it to protect her from Kristen DiMera (Stacy Haiduk) or EJ doing it for revenge! But it sounds like Lucas did it in an effort to make himself a hero – although he let her stew in her juices for an awful long time before coming to her rescue. But when he got a call right in front of their daughter, he could hardly just ignore Sami’s cries for help! It might be that Lucas let Sami stay captive in that cabin for several months because he knows how stubborn she is, and may have hoped she’d suspect EJ for the crime herself!

Days of Our Lives viewers may think that Lucas might not be the brightest bulb on the Christmas tree with this plan. EJ could be a top notch person of interest in Sami’s kidnapping since he never thought twice of her possibly being in trouble when she disappeared. For one, as previously mentioned, Sami disappeared right after EJ kicked her out of the mansion when he discovered she’d cheated on him with Lucas.

For two, her necklace that he had just bought her fell off on the ground – EJ could have torn it off her neck in a rage. Lucas thinks for those reasons plus how he’s mistreated Sami over the years that he can make the frame stick – but EJ might have alibis for that particular period of time that he can make stick! After all, EJ is a lawyer – and he knows how he can beat the rap! It might just all backfire right back on Lucas, for one thing, Sami may believe EJ’s story of being framed even though she’ll cry on Lucas’ shoulder temporarily. But if and when the truth comes out about who really kidnapped her plus framed EJ for it, Days of Our Lives viewers know that Hurricane Sami will strike with a vengeance!