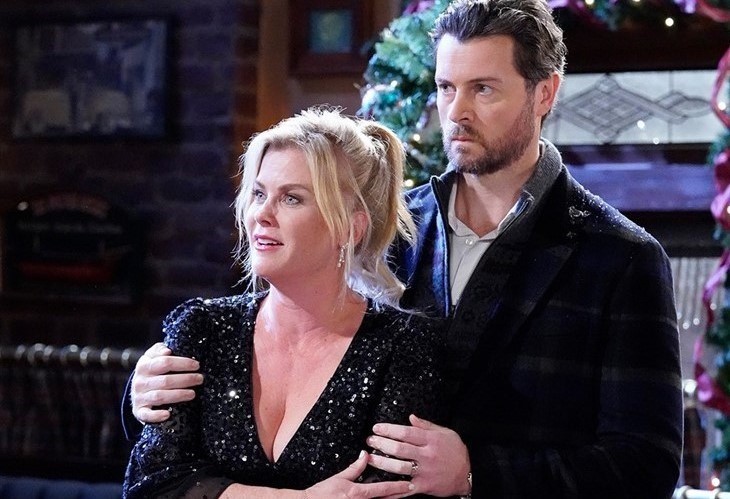 Days of Our Lives spoilers reveal that as Salem enters the new year, one person won’t be celebrating. EJ DiMera (Dan Feuerriegel) isn’t just charged with Sami DiMera’s (Alison Sweeney), but goes to trial. When Belle Brady (Martha Madison) defends EJ, it pits two sisters against each other. In the end, will the truth come out and if so, will there be any justice?

DOOL spoilers reveal that EJ was arrested just as he was about to reunite with Sami. Of course, Sami can’t believe that EJ would be behind her kidnapping. At least, that is what she thinks until Rafe Hernandez (Galen Gering) explains why EJ was arrested. Head writer Ron Carlivati told Soap Opera Digest that the police do have some evidence that points to EJ being the kidnapper.

Sami will turn to Lucas Horton (Bryan Dattilo) during all of this and of course, he will be there to “support” her. The truth almost comes out during Marlena Evans’ (Deidre Hall) exorcism, but apparently, Lucas is able to cover. Then, EJ begs Sami to let him explain his side of the story. Eventually, Sami agrees but it doesn’t sound like she believes him.

Days Of Our Lives Spoilers – Brady Sisters Battle Over Trial

Days of Our Lives spoilers reveal that this won’t be resolved right away. EJ will have to go to trial. It is suggested that Chad DiMera (Billy Flynn) discovers the truth. However, it doesn’t sound like he comes forward. In fact, Kate Roberts (Lauren Koslow) tries persuading Chad to go to the dark side.

Meanwhile, Belle represents EJ in court and it causes some drama. The scribed told the magazine,

“EJ has been falsely accused of kidnapping Sami and there is some evidence that points to him, but he is continuing to proclaim his innocence. Belle ends up making a kind of controversial decision to represent EJ, and it’s going to be a problem. Some pretty dramatic stuff happens in court that may totally throw the case.”

It sounds like Sami might have a problem with Belle representing EJ. This indicates that Sami still believes that EJ is the villain and Lucas is her hero. However, everyone knows that the truth always comes out eventually in soaps. It’s just a matter of when and how. When Sami learns that EJ is innocent and Lucas was guilty all along, how will she react? Will Lucas have to pay the price or will he get away with it? We will have to keep watching the NBC soap to see what happens with this storyline.