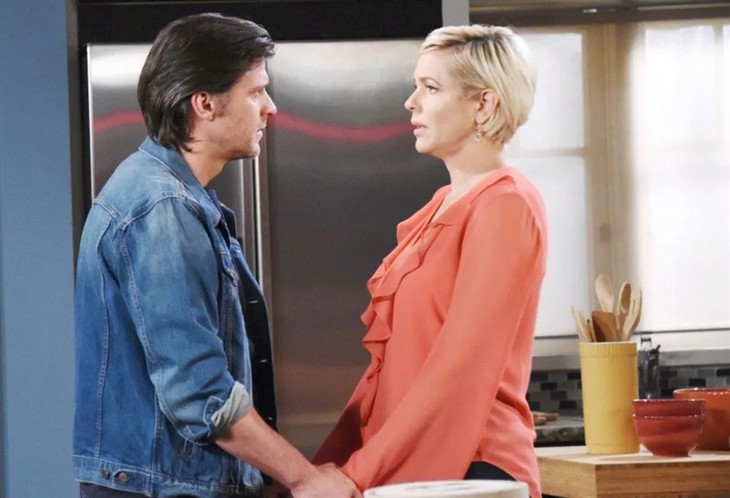 Days of Our Lives spoilers tease that Nicole Walker (Arianne Zucker) will get an unexpected visit from Eric Brady (Greg Vaughan) in an upcoming episode of Days of Our Lives! But is there anything left between them of their great love?

Days of Our Lives recaps show that when Nicole cheated on Eric with Xander Cook (Paul Telfer) a few months ago, it was after months and months of Eric postponing visits home. Days of Our Lives viewers will remember that Nicole was very upset because of all of Eric’s postponements, and was feeling very neglected.

Nicole was feeling so neglected she gave up on him ever coming home, and felt like the mission field was his mistress, and she couldn’t compete! She was in a bad way, drunk, and Xander was too and the two wound up having grief sex all night in a suite at the Salem Inn – but neither one of them noticed that Eric’s sister, and Nicole’s enemy and rival Sami DiMera (Alison Sweeney) saw them going in – and she did due diligence to make sure she broke up Eric and Nicole when he did finally come home!

Days of Our Lives viewers will recall that it was an extremely embarrassing situation as a financially desperate Xander took money from Sami to expose their affair at the Brady Pub, where Nicole and Eric were having a celebration!

DOOL Spoilers – Eric Brady Was Willing To Forgive, But Nicole Walker Felt Unworthy And That It Wouldn’t Work

Days of Our Lives spoilers and updates tease that after the fiasco at the pub, Nicole went home in tears, devastated, to the apartment she had shared with Eric and still lives in with her daughter Holly Jonas, (Elin Alexander). Eric had come home after he cooled off, and he had been willing to forgive her and was ready to try again to fix their apparently failed relationship. After years of waiting for the times to be right for them to finally marry, their relationship was in major trouble.

DOOL fans will remember that Nicole turned him down – she felt unworthy and guilty, and she was the one who broke up with him. She couldn’t see any way that they could fix anything in their marriage, and told him she wanted a divorce. Eric was brokenhearted – but gave Nicole her space, and sadly returned to Africa where he had been involved in a mission for nearly a year.

Days Of Our Lives Spoilers – Eric Brady Returns, To Cast The Devil Out Of His Mother

Days of Our Lives spoilers say that Eric and Sami’s mother, Marlena Evans (Deidre Hall) has been again possessed by the devil after twenty-five years of freedom. Longtime Days of Our Lives viewers will recall that John Black (Drake Hogestyn) was able to dispatch the devil the last time, but this time it hasn’t worked.

John supposed that maybe it is because he is not a real priest, although that didn’t seem to matter twenty-five years ago! This time, Eric will return as Father Eric – clerical collar and all, although it has not yet been revealed if he has gotten his priesthood restored!

However, Eric does pay Nicole an unexpected visit. If he has regained his Catholic priesthood, then there would be no way for Eric and Nicole to have a future as spouses or as lovers; but given that Nicole has been sleeping around lately, with two former lovers, there may not be anything left to save as far as a marriage!