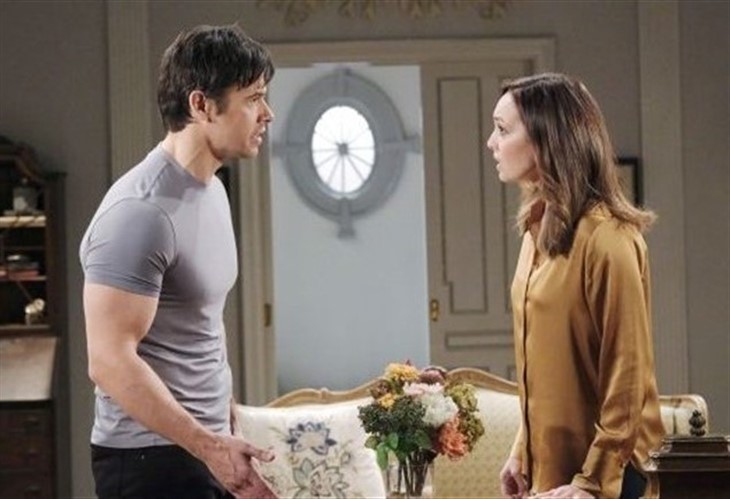 Days of Our Lives spoilers and rumors tease that Gwen Rizchech (Emily O’Brien) will do anything to hang on to her man, as she tries to throw Xander Cook (Paul Telfer) off Sarah Horton’s (Linsey Godfrey) trail by texting him false clues from a burner phone in future episodes of Days of Our Lives!

Despite Gwen’s best efforts to keep Xander and Rex Brady (Kyle Lowder) from running into each other in a recent episode of Days of Our Lives, they did anyway, outside the Salem Inn! Gwen had convinced Xander that they needed to get away from Salem and all the problems for a while, and told him they could go to London – using her unspent frequent flier miles.

Xander had received a preapproved credit card and even though neither of them have jobs or means to pay the bill, that was going to be their answer to funds. At least it would last for a while! She desperately kept him distracted until she saw that Rex and Roman Brady (Josh Taylor) were done with their chat at a table in sight of the window of their hotel room.

But as they went out of the Salem Inn, bags packed and in a hurry to catch their flight, there was Rex! Gwen quietly panicked inside as Xander was intent on making it his mission to find the missing Sarah, just as she knew he would!

Desperate Gwen has to come up with a plan, and quick! Days of Our Lives viewers will remember how Kristen DiMera (Stacy Haiduk) played games with her head to get her to help break her out of jail, threatening to reveal the truth about Sarah to Xander! Kristen told her Xander would drop her like a hot potato if he knew Sarah wasn’t with Rex and held captive on a Greek island – he’d go rescue his true love! Xander was all in a panic trying to call Maggie Kiriakis (Suzanne Rogers) to see if the communications she’d received supposedly from Sarah could be traced!

Of course, now that Rex knows that there is something amiss, he may well start looking for her as well! Gwen struggles with her insecurities and finally gives into temptation and falls back on her old standby – she’ll pull a con on Xander to throw him off the trail!

Days of Our Lives viewers can imagine what kind of con Gwen will think up – she buys a burner phone, which is untraceable, and starts sending fake texts to Xander! She’ll pretend to be Sarah herself in these fake texts, which Xander will try to use as clues to her whereabouts but won’t be able to trace where she’s at! Gwen has heard about “Doctors Without Borders” and actually Kristen told her that is where she got Rex a job without his knowledge of her involvement in it.

Kristen said there is little to no cell phone coverage so Gwen thinks that’s a perfect way to throw Xander off the trail! She texts him as Sarah and tells him the true parts of how she was kidnapped by Kristen, but now she has gotten away and is also working with “Doctors Without Borders” and tells him she’s sorry if it hurts, but she’s decided that is the life for her, and doesn’t want men in her life any more – this work is so much more fulfilling! Hopefully, Xander will buy it and stop the search!