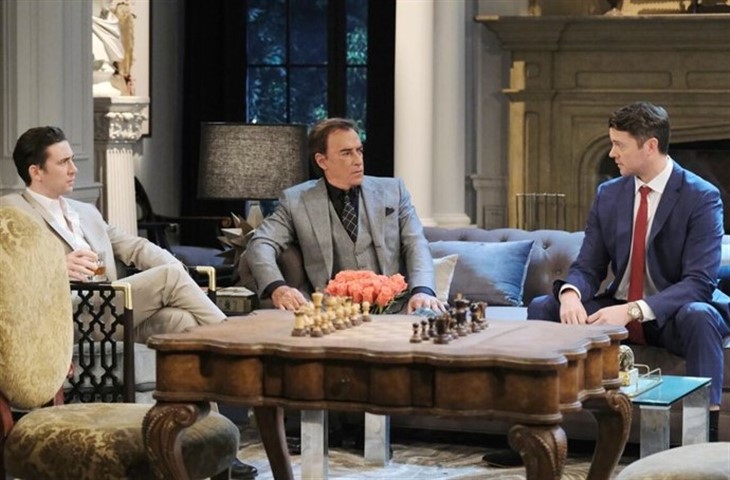 Days of Our Lives (DOOL) spoilers for Thursday, June 25, 2021, reveal in Salem the return of EJ causing problems for more people than just Sami.

Lucas (Bryan Dattilo) now knows it’s Sami (Alison Sweeney)he’s been looking for all his life and she has even been there most of his life but they could never keep it together. They raised children together, they have grandchildren together, and they even got together quite a few times this spring — only for EJ (Daniel Feuerriegel) to return to Salem a changed man and ready to reclaim his wife.

Rather than turning to booze to drown his sorrows, Lucas turns to Rafe (Galen Gering) instead since he can’t stand EJ either. They have both been married to Sami and they both know her so well and don’t believe she belongs with EJ. Will Rafe be the one to help Lucas get what he wants? Lucas sure hopes so because he is not about to let EJ have Sami, especially when he knows in his heart that Sami wants him but can’t admit it to herself.

DOOL Spoilers – The DiMera Brothers Have a Plan

With EJ back, the two brothers who barely know him and could never stand him are thrilled to see him. Did they forget they don’t like EJ or did the writers? Maybe they are happy to have another business ally. After all, EJ and Sami broke up the last time because EJ had an affair with Abigail (then Kate Mansi, now Marci Miller), who is now Chad’s (Billy Flynn) wife. There’s no love loss there between Chad and Ej.

No matter. EJ, Chad, and Tony (Thaao Penghlis) are now going to team up to get rid of Jake (Brandon Barash), that interloping brother who is just too nice for them to stand. However, they have yet to realize they are going to have to go through Gabi (Camila Banus) to do this and Gabi is a much more formidable opponent than Jake. She needs to teach her boyfriend a thing or two about playing dirty and maybe they can beat those DiMera brothers at their own game. Stay tuned to Days of Our Lives weekdays to see how these stories play out.