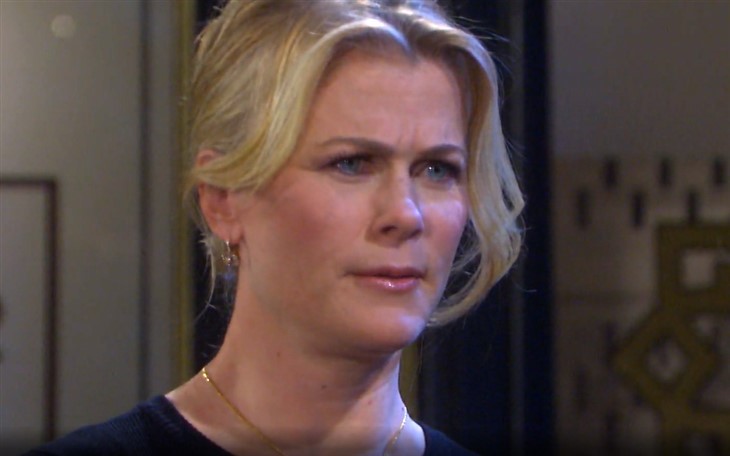 Days of Our Lives (DOOL) spoilers tease that Sami DiMera (Alison Sweeney) will be surprised to learn the real reason EJ DiMera (Dan Feurreriegel) has come to Salem in an upcoming episode of Days of Our Lives!

Days of Our Lives viewers will recall that Lucas Horton (Bryan Datillo) was at John Black (Drake Hogestyn) and Marlena Evans’ (Deidre Hall) home with Sami in a recent episode of Days of Our Lives. Lucas wanted Sami back and was talking to her about reconciliation, citing that they still loved each other and the magic from their teenage years when they first married was still there. Sami had been trying to talk Lucas into wearing a wire to record a confession he would solicit from Nicole Brady (Arianne Zucker) about cheating on Sami’s twin, Eric Brady (Greg Vaughan) with Xander Cook (Paul Telfer).

Lucas said no several times and then changed the subject to wanting her back and wanting to give their love another try. Sami, feeling guilty from the several times that she and Lucas had sex already, said she is a married woman. She has been afraid EJ would come looking for her ever since he pulled back the deposit from Xander’s account when Kristin DiMera (Stacy Haiduk) had kidnapped her and Lucas and sent Xander to kill them. Days of Our Lives viewers will recall he let them go when Sami paid him more to free them than Kristin had to kill them. Even as Lucas and Sami were talking about reconciling and Sami feared EJ would show up, there was a knock at the door. Sami answered it to a stern-looking EJ who broke out into a smile!

Days of Our Lives viewers will recall that Sami had taken care of EJ and nursed him back to health for many years, but that EJ had remained cold and distant. Lucas brought that up before EJ arrived at the door. Longtime Days of Our Lives viewers will recall that EJ literally was brought back from the dead by one of Dr. Wilhelm Rolf’s (William Utay) serums, after being shot. This was many years ago, when Stefano DiMera (Joseph Mascolo) was still alive and had ordered Rolf to inject EJ’s body with the serum, back then likely still experimental.

From then on EJ was missing and presumed dead for many years, until Sami discovered he was alive in a warehouse in Nashville, Tennessee that Rolf was using for a laboratory. Several people who had died and been resurrected were there, including Ava Vitali, (Tamara Braun) Jack Deveraux, (Matthew Ashford), and Tony DiMera (Thaao Penghlis). This was the same building that Nicole was thought to have died in when it exploded. The way EJ was described by Lucas, based on what Sami had told him, EJ had not been the man she fell in love with.

A broad smile on his face was totally unexpected since for years he had been cold, distant, and authoritarian. Sami asks why he has come to Salem. EJ has business there – but he explains that his personal business is much more important than his other business. EJ blindsides Sami when he is kind to her, and tells her he doesn’t want to lose her, he loves her, and he wants to fix their marriage! Poor Lucas! He is likely hearing all of it even if he does step into another room!