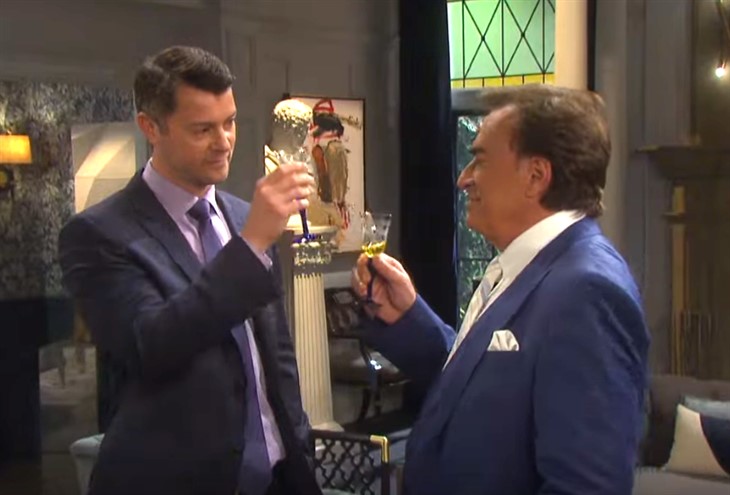 Days of Our Lives (DOOL) spoilers for Friday, June 18, 2021, reveal in Salem Chad DiMera deciding to take advantage of EJ being back in Salem.

Days Of Our Lives Spoilers  – Get That Other Brother

Chad (Billy Flynn) has all the brothers he actually likes now living with him — and one brother he doesn’t like. To that end, he has a plan. With EJ (Daniel Feuerriegel) and Tony (Thaao Penghlis) in Salem now they can work together to get rid of Jake (Brandon Barash).

It’s not like Jake even does anything that should be angering Chad in a personal way. He just looks like Stefan and he also hurt Kate (Lauren Koslow) because he fell for Kristen’s Kate mask. So, Chad has to find a way to get rid of him and goes to EJ for help.

Since EJ wants to be back at the helm at DiMera and pick up his life right where he left off nearly seven years ago, he agrees to help Chad. But why is Chad not angry at EJ for sleeping with Abby (Marci Miller)? Perhaps it was because they were not married yet. But boy does Abigail get around.

It’s time for Kate to leave the hospital, fake blindness, and short-term amnesia and all. And she can’t wait for Jake to take her back to the DiMera mansion. At least Chad is there and knows she is not blind, so she doesn’t have to play pretend with him.

How long until Gabi (Camila Banus) figures out her secret and plots her own revenge? She doesn’t like Jake is the one to take care of Kate and will let her feelings be known — loudly. Kate should know who she is dealing with here, but apparently, she conveniently forgot…

Days Of Our Lives Spoilers  – Lucas Roberts Needs A Favor

EJ is back in town just as Lucas (Bryan R. Dattilo) was starting to get through to Sami (Alison Sweeney)that they belong together. Lucas has also decided he is going to fight for Sami because after all these years he finally has clarity as to whom he belongs with. It’s been Sami all along.

So, Lucas goes to Sami’s dad and asks him for a favor. What exactly does Lucas need Roman (Josh Taylor) to do? Talk sense into Sami? Nobody has ever been able to accomplish that task well. Stay tuned to Days of Our Lives weekdays to see how these stories play out.

Days Of Our Lives Spoilers: Ciara Trying To Save Ben’s Life, Faking Amnesia For Good…