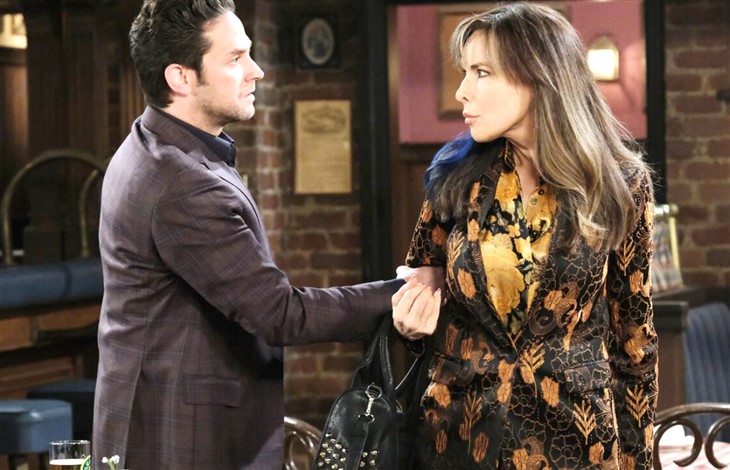 Days of Our Lives (DOOL) spoilers reveal that Kate Roberts DiMera (Lauren Koslow) has her game plan in place. Jake DiMera (Brandon Barash) continues to be clueless about what is really going on. However, Gabi Hernandez (Camila Banus) figures it out pretty quickly. She won’t lose the mansion and won’t allow Jake to be victimized. She fights back, proving her love and loyalty.

DOOL spoilers reveal that Kate was pretty irritated when she found Jake and Gabi in bed together. However, what set her on the path to payback was what she overheard in the hospital. When she woke up from her medically-induced coma, the first thing she heard was the couple making plans for the future. She decided that she had to suffer because of Kristen DiMera (Stacy Haiduk), so now she’s going to make “Jabriella” pay the price.

She already has a plan but things get a bit sweeter for her when EJ DiMera (Dan Feuerriegel) returns.

Despite Kate playing mind games with Jake, he just can’t see it. The actor told Soap Opera Digest that Jake is the type of man that tries to see the good in everyone. This includes Kate and he just refuses to believe that she would ever do anything to hurt him. Gabi tries to tell him what Kate is like when she feels crossed. Unfortunately, Jake won’t listen or believe Gabi’s story. That is not the Kate he knows, so he will be blinded by Kate’s torturous plan.

Days Of Our Lives Spoilers – Gabi Hernandez Fights Back

Days of Our Lives spoilers reveal that head writer Ron Carlivati told SOD a few weeks ago that Gabi won’t put up with Kate for long. She will sense that Kate is playing games with Jake. The two know each other too well. Gabi already tried to warn Jake about Kate but he refused to listen. So, we expect Gabi to fight back. She isn’t going to allow Jake to lose his CEO job forever, not if she can’t help it. Then, when EJ goes after the mansion, it will give Gabi additional fuel to fight.

Jake won’t believe Gabi and will continue to think Kate is on his side during the week of June 21. Gabi will fight for both of them. By the time all this is over and Jake realizes the truth, “Jabriella” will be solid. Jake might have had some secret concerns about choosing Gabi. However, her actions will prove her love and loyalty. But will it be enough to put them back in a position of power? Or will they need to accept that their time at DiMera is over? In either case, we expect these two to stay together… with or without the DiMera empire.

Be sure to catch up on everything happening with DOOL news right now. Come back often for Days of Our Lives spoilers, news, and updates.