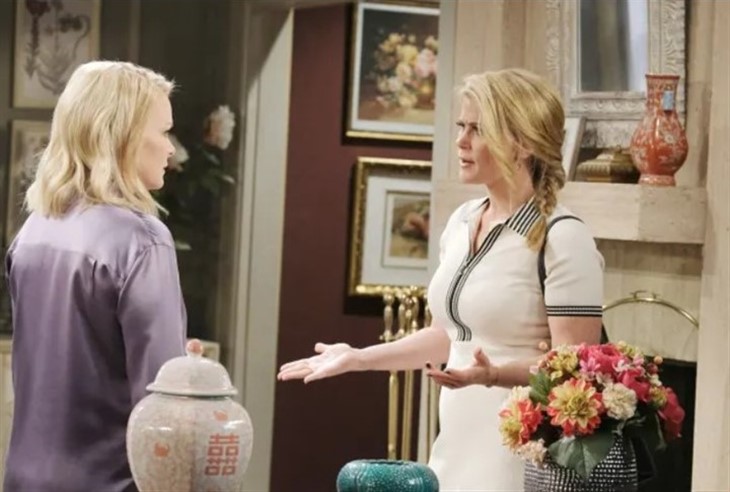 Days of Our Lives (DOOL) spoilers reveal that Belle Brady (Martha Madison) is usually the ethical sister. However, everyone has their limits and the lawyer is no exception. Belle made it clear to EJ DiMera (Dan Feuerriegel) that she has not forgiven or forgotten Sami DiMera’s (Alison Sweeney) stunt with Jan Spears (Heather Lindell). She could be tempted to finally get revenge.

Days Of Our Lives Spoilers – The Good Brady Sister

DOOL spoilers reveal that Belle is considered the “good” Brady sister. Unfortunately, she has been the victim of Sami’s stunts ever since she was born… literally. Sami even plotted to sell baby Belle on the black market. However, everyone has their limits. Sometimes, a line gets crossed which changes them forever. If one feels that they have not gotten any justice, it could lead even the most moral person to balance the scales themselves.

On Thursday’s episode, Belle vented to EJ about his wife. This was before Nicole Walker Brady (Arianne Zucker) dropped off Kristen DiMera’s (Stacy Haiduk) letter. Unaware that Sami and Lucas Horton (Bryan Dattilo) had an affair, EJ defended his wife. Then, he told Belle that they should get back to business, which was his way of shutting down the subject. Belle did have one final statement to make. She said that if Sami was exposed the way Nicole was, then there would be no protecting her from EJ’s wrath.

Days of Our Lives spoilers reveal that by the end of Thursday’s episode, EJ found out the truth about “Lumi.” He obviously already has a devious plan in place. As Sami got a romantic candlelit dinner ready, EJ held her close and said nothing of his discovery. That spells bad news for Sami and Lucas. After all, if EJ confronted his wife, then we would only be worried about Lucas. With the look on EJ’s face, it is clear that Sami is also going to be blindsided and punished to the extreme.

EJ is aware of how much Belle hates Sami for releasing Jan Spears. As Belle explained to him, Sami released a sociopath on Salem. A woman whose mission in life is to destroy Belle and Shawn Brady’s (Brandon Beemer). She even kidnapped their daughter, Claire Brady (Isabel Durant). The young woman nearly lost her life and Belle almost went to prison for a murder she didn’t commit.

With EJ knowing all of this, there’s a very good chance that he will tempt Belle with an offer. Despite the goodness of Belle’s character, we just might see her get revenge by accepting EJ’s deal. However, could she end up regretting it when things go too far?