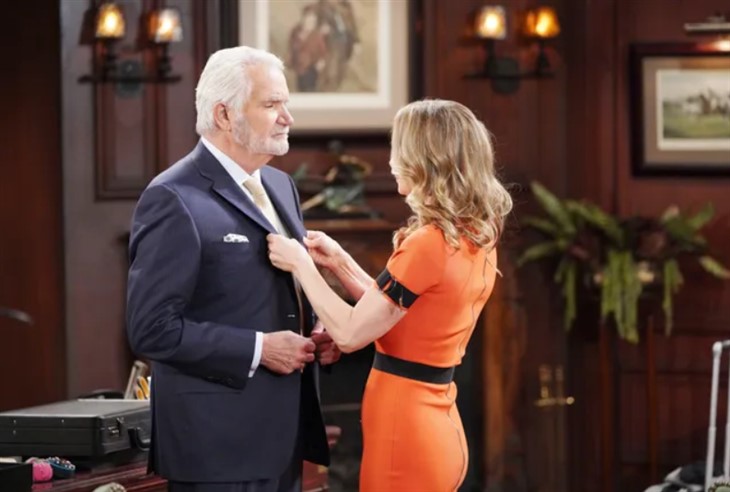 She still loves him and wishes that they had never separated and divorced. Donna has been aggrieved for Eric when he has had so many problems with Quinn Forrester (Rena Sofer) and has seen him hurt and deceived over and over again. Eric has made it clear that he is through with Quinn for good, even taking down her portrait from the Forrester Mansion and asking Carter Walton (Lawrence Saint-Victor) to throw it away! Carter took it back to his loft and he’s walking on shaky ground with both his friendship with the Forresters and his job by continuing to have anything to do with her whatsoever, but still continues to have a lot of “whatsoever” to do with her. Quinn can’t hurt Eric much more than she already has, but Donna may now have a chance to get him back once his divorce is complete. She’s not going to make the mistake of going after him when he’s still in the midst of shedding Quinn!

Viewers of The Bold and The Beautiful know that Eric probably could use a female shoulder to cry on, one that is not attached to Ridge Forrester (Thorsten Kaye)! Neither Donna or Brooke Logan Forrester (Katherine Kelly Lang) want him gravitating to Shauna Fulton (Denise Richards) either, because as especially Brooke would be concerned, Shauna is no better than Quinn! Eric was impressed with Shauna’s eventual honesty over the fake marriage to Ridge, but since she again lied and covered for Quinn and told both Eric and even her own daughter that she was the one in the affair with Carter, Brooke considers her the same as Quinn. Donna likely would too but not be so vocal about it. It would be a good time for Donna to reach out to Eric and let him know she’s there if he needs her, and a bond could be re-established or reignited in the process. Viewers of The Bold and The Beautiful know that Donna won’t manipulate Eric or try to take advantage of his situation, but becoming emotionally close even as a good friend is a good foundation for something more in the future!