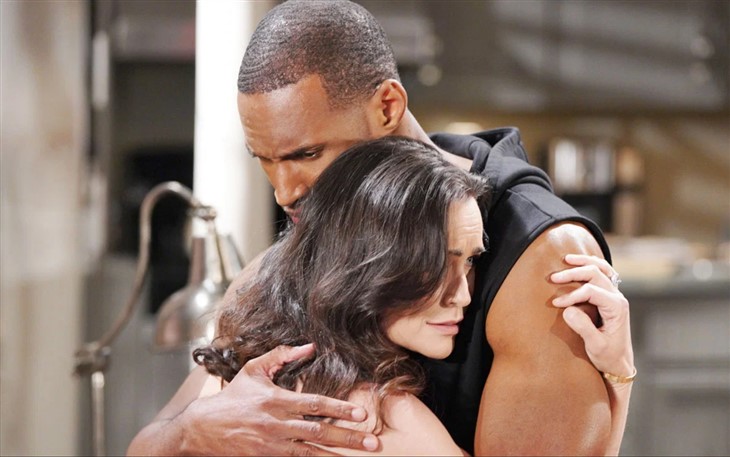 The Bold and the Beautiful (B&B) spoilers for Friday, July 23, 2021, reveal in Los Angeles a day that will define Quinn and Carter’s relationship for the near future.

Not only did Carter (Lawrence Saint-Victor) keep that portrait of Quinn (Rena Sofer) so he can gaze longingly and lustfully at it whenever he wants, but he also managed to save her job. And this wasn’t just a job to Quinn, this was her baby (besides Wyatt) and her creation. Quinn’s jewelry line is something she takes pride in and now Eric (John McCook) is going to let her keep it because Carter convinced him.

Quinn has no idea why Carter wants to see her again so soon after they just had an afternoon in bed where they said they wouldn’t see each other again, but why not meet again in the evening. Quinn can’t believe her ears when Carter tells her that she can keep her jewelry line. She never even has to go into the office where things would be awkward. She can work from wherever she wants and keep doing what she loves doing while earning an income. What wins Quinn over even more is the fact that Carter went to bat for her like that. Maybe Eric’s rejection in bed was the best thing to ever happen to her.

Of course, Wyatt (Darin Brooks) and Flo (Katrina Bowden) are nosy and need to know what’s going on with Quinn. With no real life of their own, they decide knowing what is happening with Wyatt’s mother is completely their business, especially with her staying with them again.

Will they follow her straight to Carter’s and figure out her little secret? If they do, can they just be happy for her and not chastise her. Or will they start telling people, causing an irate Forrester family to lash out at Carter? Perhaps they will tell her to just live with Carter instead, which might not sound like a bad idea to anyone unless they think Ridge (Thorsten Kaye) and Eric will one day just show up and find her. Stay tuned to The Bold and the Beautiful weekdays to see how these stories play out.