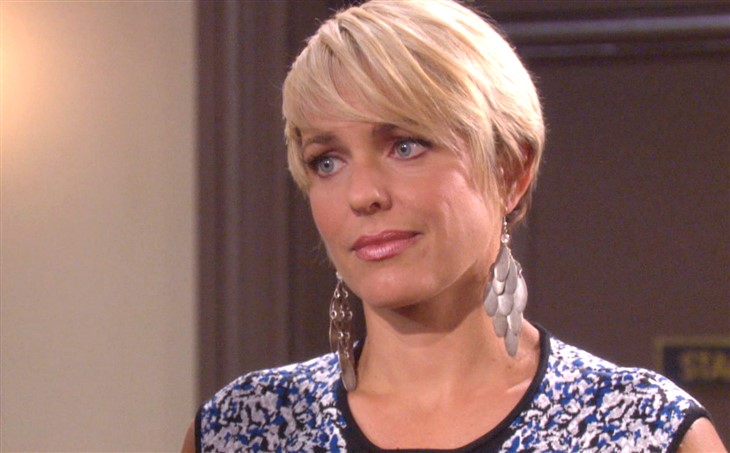 Days of Our Lives (DOOL) spoilers reveal that in Salem Nicole Walker Brady (Arianne Zucker) is determined to make Sami DiMera (Alison Sweeney) pay. Just exposing Sami’s affair with Lucas Horton (Bryan Dattilo) might not be enough. Nicole could sleep with EJ DiMera (Dan Feuerriegel) in order to deliver the most pain. Plus, fans have been talking about the chemistry between EJ and Nicole.

DOOL spoilers reveal that Philip Kiriakis (Jay Kenneth Johnson) gives Nicole the letter that Kristen DiMera (Stacy Haiduk) wrote to EJ. Sami intercepted that letter, so he still has no clue that “Lumi” had an affair. He suspects that Lucas wants Sami back, but doesn’t realize that Sami gave in to temptation. When EJ reads the letter, he will be furious and will want revenge.

When EJ confronts Sami, he basically tells her that she slept with his worst enemy. So, he might want to pay her back by doing the same. Even though he loves Sami with all of his heart, he is also a man that people learn not to cross. He will want Lucas punished, but he will also want Sami to feel the pain that he feels.

Meanwhile, Nicole’s entire world has come apart because of Sami. She actually paid Xander Cook (Paul Telfer) $1 million to expose their one-night stand. Sami’s hatred for Nicole was more powerful than her love for Eric Brady (Greg Vaughan). After all, Eric was the one hurt by all of this and for Sami to do it publicly was cruel. Nicole will want Sami to feel the same pain and what better way than by sleeping with EJ and then bragging about it.

Days of Our Lives spoilers confirm that Nicole ends up with Rafe Hernandez (Galen Gering). However, there might be some time before that happens. Fans keep commenting on the chemistry between Nicole and EJ. Granted, the two were married a long time ago, but that was when EJ was played by James Scott. The writers will probably capitalize on the chemistry between EJ and Nicole, which makes Sami suffer the consequences in the most painful way.

There would be nothing worse to Sami than her husband sleeping with her worst enemy. Plus, this storyline is written to make Sami the bigger villain. Head writer Ron Carlivati recently told Soap Opera Digest that Nicole doesn’t like to play the victim. Of course, fans have different opinions on that. However, Sami is definitely the bigger villain in this cheating war and Nicole will want to get revenge.

It just seems that exposing “Lumi” might not be enough punishment. She could have her heart ripped out if EJ and Nicole slept together. This isn’t confirmed, but could happen. To find out what the future holds, we will have to keep watching the NBC soap.