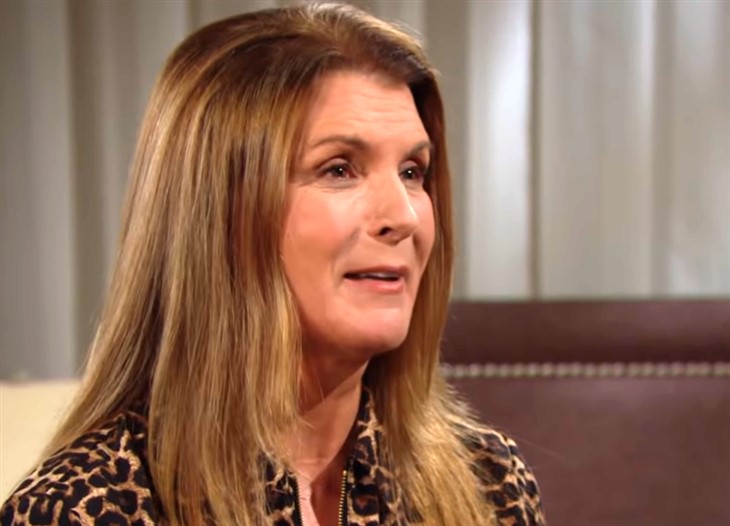 The Bold and the Beautiful (B&B) spoilers document that Sheila Carter (Kimberlin Brown) has one man convinced that he needs to help her. No, that is not a reference to Deacon Sharpe (Sean Kanan). Instead, it refers to Jack Finnegan (Ted King).

Add Deacon’s belief that he should go along with Sheila’s Shecon ruse or even the actual plunge into real couple’s status, and B&B’s storyline is bringing the heat many weeks after summer ended.

The Bold And The Beautiful Spoilers – Jack Finnegan Has One Option

Sheila knows what Deacon does not. Jack can not speak against Sheila. So, he may be forced to support the Shecon relationship. Jack might even feel that Sheila being with Deacon deflects the interest of this one-time connection away from him. Jack will be mistaken if he draws that conclusion, as Sheila can multitask villainous items as well as anyone in the soap world.

Sheila told Jack to his face that he would not come clean with Li Finnegan (Naomi Matsuda) or Finn. To date, that assessment has proven true.

The one option Jack has, being honest, is the solution. But he has foolishly decided to keep the truth from his wife and genetic son.

Sheila’s idea about splitting Finn and Steffy Forrester Finnegan (Jacqueline MacInnes Wood) goes beyond an impulse. Deacon does not know Finn can be boxed in by the Shecon pressure and Sheila pulling Jack’s strings to influence their son.

The goal is to create increasing tension on Sinn and Lope. The incredible reality of Sheila and Deacon claiming couple’s status will remain a buzzworthy topic at the cliff house, in the cabin, at Forrester Creations, and Spencer Publications.

Finn is a sensitive soul. He also has far less experience dealing with the harsher elements of life. Steffy is wise to the world and faces a challenge in toughening her husband up where his birth mother is concerned.

The Bold And The Beautiful Spoilers – Goal Advanced Through Mayhem

Sheila needs others to fight so that they are weakened. She told Deacon that the potential of Finn and Hope Spencer (Annika Noelle) eventually being a couple is not far-fetched.

Deacon thinks Sheila is certifiable. His buy-in will be more likely if progress happens in the coming weeks.

Sinn and Lope are just beginning to talk this out. Finn and Hope do not plan on turning away from their parents. Sheila can play the Jack card at a point in her game where maximum disruption takes place.