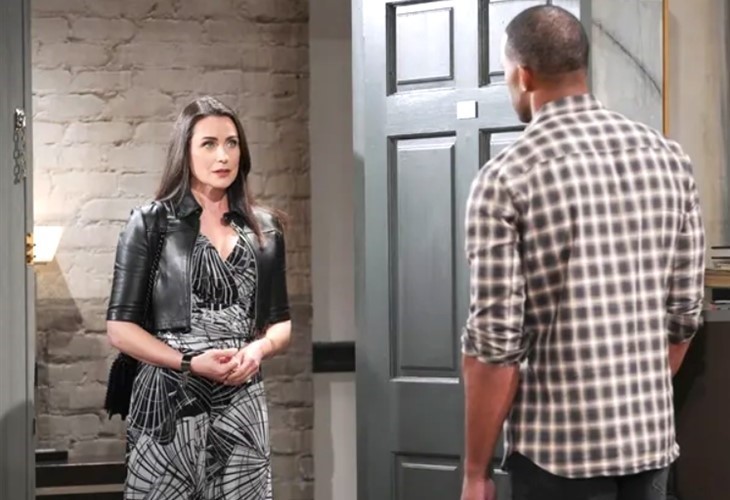 The Bold and the Beautiful spoilers for Friday, October 29, 2021, reveal Quinn Fuller learning a shocking truth. And she thought she made the right decision…

The Bold And The Beautiful Spoilers: Quinn Goes Ballistic

When Quinn (Rena Sofer) finds out that Brooke Forrester (Katherine Kelly Lang) and Donna Logan (Jennifer Garies) have been conspiring for Eric (John McCook) to take Donna back, it won’t be a pretty scene. Quinn just left Carter Walton (Lawrence Saint-Victor) behind to commit to her marriage to Eric Forrester whether he can perform in bed or not. She is not about to let anything or anyone ruin that for her now.

Will Brooke and Donna spill the beans about a little bottle of honey making all of Eric’s problems go away? That would drive Quinn insane — and maybe to do something rash. If she does lose Eric, she will surely run right back to Carter wanting to make that relationship work not. However, he might not be available anymore. What’s a woman to do? With Quinn, it can go either way but odds look like she is about to revert to form. Maybe Wyatt Spencer better come fetch his mother…

It’s been a hard year for Katie (Heather Tom) and Carter. Katie has spent most of the year trying to decide whether she should reunite with Dollar Bill (Don Diamont), who can’t stop begging for her to take him back. Carter was all set to marry Zoe Buckingham (Kiara Barnes), but her little obsession for Zende Forrester ruined that. By the time he was ready to take her back, he was already deeply involved with Quinn. When he thought he could have Quinn, she went back to Eric and Carter was left all alone.

Or was he? Well, he now has Katie as a friend and they have been opening up to one another. That’s exactly how he ended up in the Quinn situation, but at least Katie is not a married woman. Bill might want her, but she is still free to do whatever she wants and that is appealing to Carter. Stay tuned to The Bold and the Beautiful weekdays to see how these stories play out.