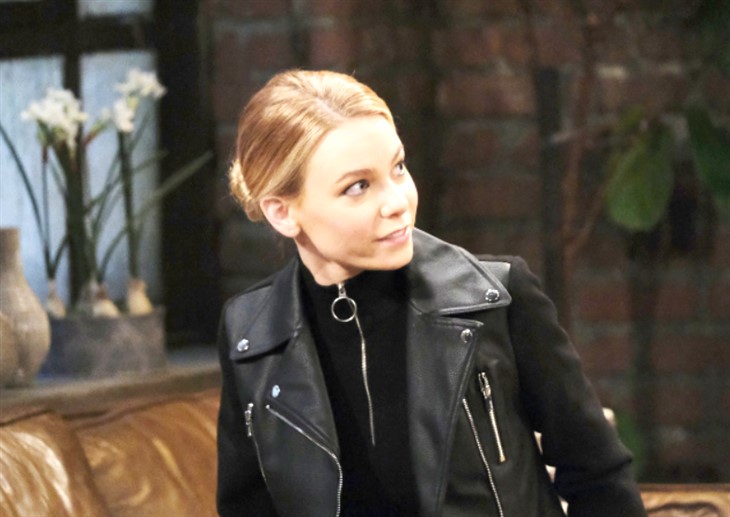 General Hospital (GH) spoilers and rumors tease in a leaked casting script that Nelle Benson (Chloe Lanier) and Esme Prince (Avery Kristen Pohl) could be connected, and the script could be showing Esme as a child either talking to Frank Benson’s second wife (uncast character) or possibly an older Nelle herself. General Hospital viewers will recall that both girls were adopted, and both appear to have ties to Ryan Chamberlain (Jon Lindstrom).

General Hospital viewers will recall that Esme has said that she knew she was adopted, although she has not stated if it were when she was a baby. The leaker of the casting script thinks the little girl “Carina” is Esme as a child, and this scene will be a flashback. The leaker also indicates in the tweet that the script was leaked in that Esme and Nelle are connected somehow. “Alice” could either be her mother – her birth mother – or an older sister. It sounds more like if “Alice’ is her mother from the connotations in the script.

The scene begins in the living room, and “Carina” and “Alice” are eating dinner – “Alice” can barely get a fork to her mouth for all of “Carina’s” questions! “Carina” has obviously just found out that her father has a brother, and wants to know why “Alice” didn’t tell her. She responds that she didn’t know because he didn’t tell her. “Carina” wants to know why. “Alice” doesn’t know”. “Carina” wants to know why she didn’t ask him. General Hospital viewers will get the feeling that whoever “Alice” and “Carina” are, “Carina” is asking a lot of impatient questions, and “Alice” doesn’t seem to have a lot of patience for them!

GH Spoilers And Rumors – “Alice” Feels Like She Is Being Interrogated

General Hospital viewers will note that “Alice” tells “Carina” she feels like she is being interrogated. The usage of the word “interrogated” could be a hint that “Alice” is either in some kind of detective or spy work, or she could have been on the other side of the interrogation table as well! She asks “Carina” if they can just eat their dinner, and she eats a few bites and “Carina” starts up her line of questioning again. She tells “Alice” that it just doesn’t make sense for her father to not tell her he has a brother. This scene obviously takes place when “Carina’s” parents are still together, because “Alice” agrees, and says no, nothing “Carina’s” father was doing lately made sense. “Carina” asks “Alice” what he’s like – “Alice” asks who?

Either the little girl was not paying attention or “Alice” lied and she caught her in it, because “Alice” said didn’t know that “Carina’s” father had a brother but suddenly she admits she knew as “Carina” responds “Uncle Mark” and “Alice” admits she’s only seen the man once! Longtime General Hospital viewers will recall there was a neurologist at General Hospital years ago named Mark Dante (Gerald Gordon) who moved to England years ago, but he doesn’t seem connected here. He didn’t have any brothers, either.

General Hospital viewers will then see “Carina” ask “Alice” if “Uncle Mark” is handsome, “Alice” agrees that he is. “Carina” wants to know what else “Alice” can tell her about “Uncle Mark”. “Alice” tells her she doesn’t know anything about him, except that for some reason her father seems to hate him. “Carina” says you can’t hate a brother, and “Alice” verifies he does – believe her! According to the tweeter of the leaked script, “Carina” is Esme as a child – but it is uncertain whether “Alice” is her mother or an older Nelle Benson, say, as a teenager.

General Hospital viewers will remember that if “Alice” is Nelle in this script, that she was a teacher in Florida and came to Port Charles as a nanny, although the rest of the context does not make a lot of sense for this to be Nelle. Nelle and Esme could have a connection if Frank Benson’s second wife is also Esme’s birth mother, and this could be “Alice”. “Alice” would also need to be Ryan Chamberlain’s (Jon Lindstrom) lover, unless in fact he did marry during all those years he was presumed dead in the DVX. The wording “Alice” uses early in the script of “interrogation” could hint to her having also been in the DVX, and may be a reason for her to have given Esme up for adoption.