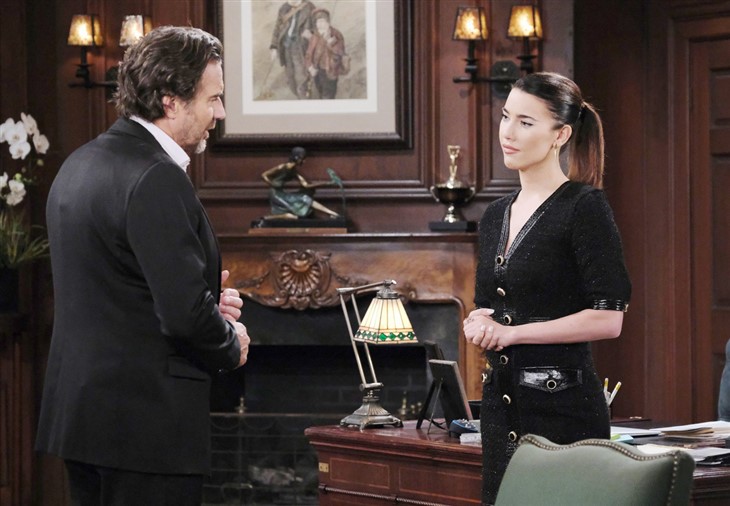 The Bold and the Beautiful spoilers document that Ridge Forrester (Thorsten Kaye) and his daughter, Steffy Forrester Finnegan (Jacqueline MacInnes Wood), believe they know what is best for their families. That belief, while well-intended, does not respect Hope Spencer’s (Annika Noelle) decision.

Deacon Sharpe (Sean Kanan) told his daughter that the initial letter he received from her while he was in jail was life-changing. He no longer felt that his life was doomed to failure.

Brooke Logan Forrester (Katherine Kelly Lang) can not allow Ridge’s protective instincts to drive a wedge between her and Hope. While Ridge assumed a fatherly role in Hope’s life, Noelle’s character is an adult now.

The Forrester’s need to step outside of themselves. If Ridge and Steffy can do so, they will recognize they are overbearing rather than just protective.

Hope recently happened upon Steffy telling Liam Spencer (Scott Clifton) to put his foot down where Deacon was concerned. So, Hope has to set Steffy straight. A similar scenario played out when Hope had to forcefully remind Ridge that he was not her father when they were debating in front of Brooke.

Ridge put Steffy through a lot when he left her mother, Taylor Hayes (Krista Allen), on two different occasions. His many marriages, including the current, astonishing eighth to Brooke, created plenty of drama for Steffy through the years.

Kaye’s character is no saint. He has various enemies beyond the renewed rivalry with Deacon.

In contrast, Hope does not generally involve herself in other people’s lives. Deacon is also not looking to create trouble.

Ridge and Steffy are chiding Deacon for the past. They are criticizing Hope for what they perceive as her naive assumptions about the future. Hope and Deacon are accurately assessing Ridge and Steffy’s behavior as arrogant.

The choice that Ridge wants Brooke to make is between his opinion and Hope’s. She has been trying to avoid making a false choice.

There is a compromise to be had if time passes and Deacon lives true to his pledge. Hope wants to give her father a chance to prove himself.

Despite misgivings Brooke has about Deacon, she can not risk alienating Hope to please Ridge. Brooke must side with her daughter.