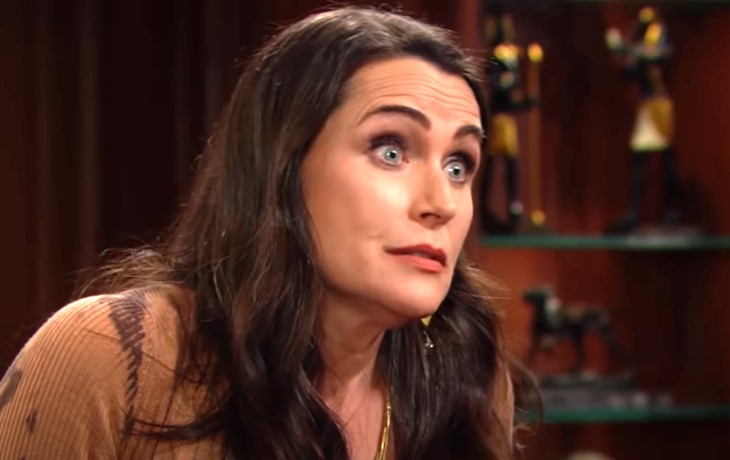 The Bold and the Beautiful spoilers for Tuesday, November 2, 2021, reveal Quinn Fuller trying to gain control over her marriage — and her husband.

The Bold And the Beautiful Spoilers – Quinn Forrster Is Relentless

Knowing that Donna Logan (Jennifer Gareis) was able to solve Eric Forrester’s (John McCook) little bedroom problem with a little honey and that Brooke Forrester (Katherine Kelly Lang) was conspiring with her sister so Donna could win Eric back has Quinn (Rena Sofer) going ballistic. She lost it on Donna and clearly terrified the woman and now she gives Eric an ultimatum. Will she demand he not see Donna anymore — both personally and professionally?

We’re not sure where Quinn has the grounds to do that considering she is the one who had an affair and then took her husband’s “orders” to continue the affair. But she no longer sees Carter (Lawrence Saint-Victor) just like Eric wanted, so doesn’t Quinn deserve for her own demands to be met? She sure thinks so, but will Eric?

And what will Quinn really do if Eric doesn’t do what she wants? She might have a hard time crawling back to Carter Walton. She firmly rejected him and he started confiding in Katie Logan (Heather Tom). Oh, those Logan sisters are the bane of Quinn’s existence.

Steffy (Jacqueline MacInnes Wood) isn’t very happy when she learns that Hope Logan Spencer (Annika Noelle) has been giving her husband, Finn (Tanner Novlan), advice on what to do about the Sheila Carter (Kimberlin Brown) situation. How dare Hope meddle in her marriage? She and Finn have an agreement about Sheila — he is not to see her under any circumstances so any advice Hope gives is moot, according to Steffy. Steffy also thought she finally had a relationship that didn’t somehow involve Hope, but she could never really get that lucky, could she?

How will Finn take to Steffy telling him who he can and can’t listen to? Hope is his friend and he seems to like confiding in women. Now that Paris Buckingham (Diamond White) has moved out, at least he now has Hope. Stay tuned to The Bold and the Beautiful weekdays to see how these stories play out.

Days Of Our Lives (DOOL) Spoilers: MarDevil’s Halloween Spree Is Far From Over

Days Of Our Lives Spoilers: Is Sarah Horton About To Return To Salem?