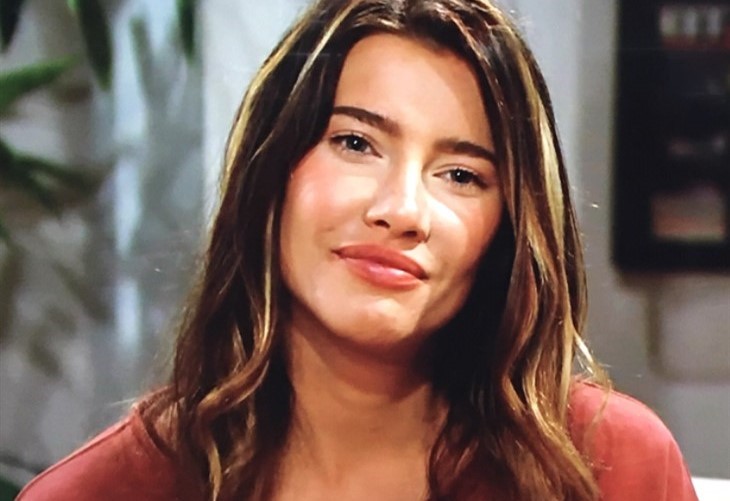 The Bold and the Beautiful (B&B) spoilers and rumors indicate that Steffy Forrester’s (Jacqueline MacInnes Wood) family may be growing.

Steffy is already a mom to Kelly Spencer (Avalon and Colette Gray) and Hayes Finnegan (Piper Harriot). Having another baby is the furthest thing on Steffy and Dr. John “Finn” Finnegan’s (Tanner Novlan) minds at the moment, but a surprise pregnancy could be in their future.

Wood recently announced she was expecting her third child. Already fans are speculating on whether the writers will incorporate her pregnancy into the show.

It’s only been a few months since Steffy gave birth to Hayes. So it seems like another pregnancy is out of the question.

Yet, B&B loves to do surprise twists, so it wouldn’t be a shock if Steffy ends up in the family way again.

Another baby would add more drama to Steffy’s storyline.

There’s been a lot of turmoil in Steffy and Finn’s lives recently. The biggest problem is the arrival of his mother and longtime Forreter nemesis Sheila Carter (Kimberlin Brown).

Since then she and Finn have been locked in an on-going disagreement about Sheila’s involvement in their lives. With Sheila’s dangerous history, it’s understandable why Steffy doesn’t want Sheila near her family. However, Finn has a desire to get to know his mother despite Steffy’s objections.

Steffy and Finn have enough on their plates right now. But their lives may become more chaotic when Steffy becomes pregnant again.

Any other time Steffy would be overjoyed by a pregnancy. But this isn’t the best time. With Sheila lurking around causing trouble, Steffy worried for her safety and the safety of her children.

The Bold And The Beautiful Rumors – Pregnancy Complications For Steffy Forrester

Whether Steffy becomes pregnant remains to be seen. But if Steffy does find herself expecting again, there’s bound to be drama.

Of course there’s the Sheila factor. With Steffy and Finn having another baby, this will increase Sheila’s scheme to be part of her son and grandchildren’s lives. The threat of Sheila is already causing stress for Steffy and it’ll be unhealthy for her and her unborn baby.

Aside from Sheila, another complication for Steffy could be more paternity drama. Both of Steffy’s pregnancies were centered around who’s the daddy storylines. When she was pregnant with Hayes, she didn’t know if Finn or Liam Spencer (Scott Clifton) was the father.

Although Steffy’s with Finn, she can’t forget about her past with Liam. Recently, the show’s been hinting at a quadrangle with Steffy, Finn, Liam, and Hope Logan (Annika Noelle).

With both Steffy and Liam having trouble in their marriages, it’s only a matter of time before the exes are comforting with each other. And B&B fans know what happens when Steffy and Liam get together.

Once again Steffy could find herself pregnant and unsure who the father is. Only this time it may Sheila who’ll do the tampering with the DNA results.