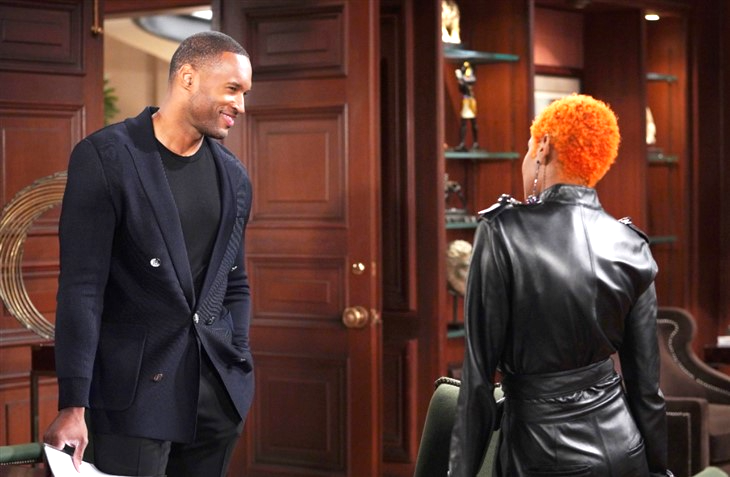 The Bold and the Beautiful (B&B) spoilers document that Carter Walton (Lawrence Saint-Victor) had an intriguing conversation with Paris Buckingham (Diamond White). They discussed her living situation, which is about to change if Zende Forrester Dominguez (Delon de Metz) gets his wish.

Carter’s link to Paris formed when he was engaged to her sister, Zoe Buckingham (Kiara Barnes). Zarter ended badly with Carter’s heart-breaking.

Saint-Victor’s character held Zende partially responsible for allowing Zoe to chase him. That assessment was off-base, which Zende eventually convinced Carter to accept.

The Bold And The Beautiful Spoilers – Katie Logan Is New Destiny

Katie Logan (Heather Tom) appears to be Carter’s next love interest. Both characters are single and see similarities in their love lives.

Carter rebounded from Zoe to Quinn Fuller (Rena Sofer), with the Quarter results being more disastrous than the Zarter engagement fail.

Katie is drawn to Carter but is proceeding cautiously. Her marriage to Thorne Forrester (Ingo Rademacher) and romance with Wyatt Spencer (Darin Brooks) were short-lived ventures. She has also decided that Bill Spencer (Don Diamont) is not a revival option.

Paris likes Zende and finds him to be attractive. She certainly is not expecting to receive an engagement ring. But that is what de Metz’ character is having Quinn create.

Carter’s ask about her living arrangement was noteworthy. He and others find it to be unusual that she agreed to be in the same small space with Thomas Forrester (Matthew Atkinson).

Paris tells everyone that she and Thomas are not home at the same time together. She does not feel defensive, which seems to confirm that Paris does not currently see Thomas as a romantic option.

The Bold And The Beautiful Spoilers – Carter Walton Feeling Confident

Carter’s problem was a lack of confidence. He coupled with Zoe so quickly because he felt bad about past missteps with other women.

What happened after Zarter was truly painful. Quinn took advantage of Carter’s vulnerability. She knew better based on her marriage and significant experience with relationships. But feelings overwhelmed logic. It happens in daytime and real life, as viewers know.

With his increase in confidence, Carter should realize that he can pursue available women without believing that immediate commitment needs to happen. So, if one does not occur with Katie and Paris does not get engaged to Zende, Zoe’s sister could be his next love.