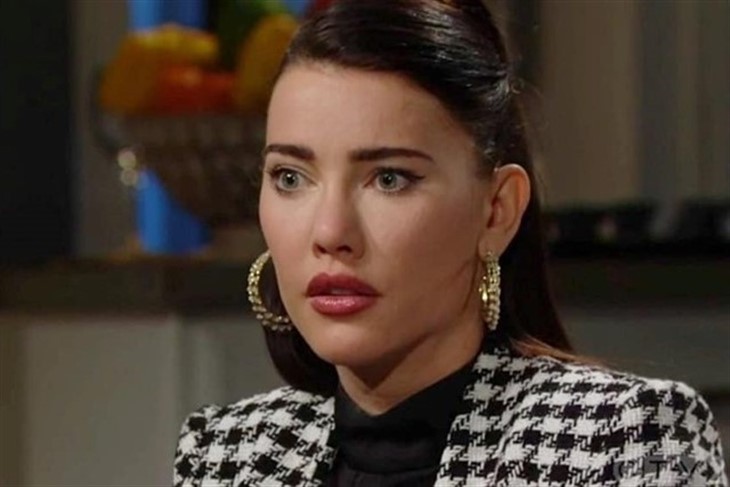 The Bold and the Beautiful (B&B) spoilers reveal that Jacqueline MacInnes Wood (Steffy Forrester Finnegan) just announced she is pregnant with her third child. The pregnancy might be hidden this time, but there is always the possibility that head writer Bradley Bell will write it into the soap. With “SINN” facing another marriage conflict, could there be yet another who’s the daddy storyline?

The Bold And The Beautiful Spoilers – Other Pregnancies Written In

Steffy already has two children and both of those pregnancies had a who’s the daddy storyline. With Kelly Spencer (Colette and Avalon Gray), Steffy had slept with both Liam Spencer (Scott Clifton) and his father, Bill Spencer (Don Diamont). In the end, Liam turned out to be the father.

Then, with Hayes Forrester Finnegan (Piper Harriot), Steffy slept with both Liam and John “Finn” Finnegan (Tanner Novlan). Despite Vincent “Vinny” Walker (Joe LoCicero) tampering with the paternity test, Finn was the father of the baby.

Finn and Steffy nearly didn’t make it after their wedding. That is when Sheila Carter (Kimberlin Brown) came into Finn’s life. The doctor went through a struggle trying to figure out how to have both his wife and mother in his life. However, he ultimately decided that Sheila’s lies and manipulations were too much. Finn cut Sheila out of his life and “SINN” seemed as if they would get their happily ever after.

However, with Finn learning that Jack Finnegan (Ted King) only confessed due to Sheila, he is wondering if she really has changed. This could set up a brand new conflict for the couple.

The Bold And The Beautiful Spoilers – ‘Lope’ Issues Bring ‘Steam’ Together

The Bold and the Beautiful spoilers reveal that Finn and Steffy aren’t the only ones that could have marital problems. Liam made a pact with Ridge Forrester (Thorsten Kaye) to project Hope Logan Spencer (Annika Noelle). However, Hope is running around making ultimatums on Deacon Sharpe’s (Sean Kanan) behalf. So, “Lope” could also have some marriage trouble. In the past, that has always brought “Steam” back together, even if just for one night. So, it could happen again.

Plus, we have Sheila who blames not having a relationship with Finn on Steffy. Sheila has tampered with paternity tests in the past. So, she could find out that “Steam” once again slept together and use it to make Liam the father. If “SINN” broke up, then Sheila might think she has a better chance of having a relationship with her son. What do you think is going to happen with Woods’ third pregnancy and how will it affect Steffy if its written into the soap?