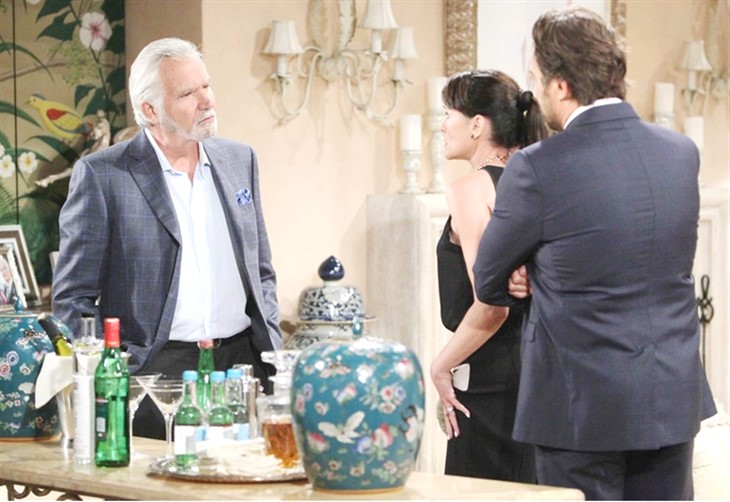 Viewers of the Bold and The Beautiful will recall that Ridge hired Justin Barber (Aaron D. Spears) to do PI, or Private Investigator work. Ridge wanted Justin to perform surveillance on Quinn Forrester (Rena Sofer) and report back to him.

B&B updates and spoilers indicate Justin not only did what Ridge had hired him for, but got results! Justin picked the lock of Carter Walton’s (Lawrence Saint-Victor) house when he followed Quinn there, then opened the door to Carter’s bedroom where he found Carter and Quinn in bed!

Of course, he reported back to Ridge but not before telling Carter and Quinn they were busted! Ridge then will be livid when Justin tells him his findings, and what Quinn tells him – that it was Eric’s idea – will really tick him off! Ridge knows his father has never been a swinger and doesn’t believe Quinn. Then, the really difficult task is still ahead – to tell Eric about Justin’s findings!

According to The Bold and the Beautiful spoilers, Eric has been very clear in recent episodes of The Bold and The Beautiful that he doesn’t appreciate his and Quinn’s privacy being violated! Eric told Ridge in not so many words to just butt out! Eric did make some accommodation for the Logan sisters’ concerns for him, but even Brooke Logan Forrester (Katherine Kelly Lang) got on Eric’s nerves with her negativity about Quinn!

Eric has tried to convince his family and extended family that he’s a big boy and can take care of himself on The Bold and the Beautiful, but Ridge in particular has been bent on proving to Eric that he’s being fooled and manipulated by Quinn! Ridge is treading on some very shaky ground in his relationship with Eric, but he doesn’t realize exactly how shaky that ground is as he continues to try to convince Eric to dump Quinn!

The Bold and The Beautiful rumors hint that a big, big blowup is building up between Eric and Ridge! Ridge has seriously overstepped boundaries by hiring Justin to spy on Quinn, and when he tells Eric what Justin saw, Eric will go ballistic! Longtime viewers of The Bold and The Beautiful can understand Ridge, Brooke, and the rest of the family’s concern that Quinn will hurt Eric yet again, but Eric confirms to Ridge that this half-open marriage indeed was his idea!

It is difficult enough for Eric to go through male menopause and develop erectile dysfunction which apparently is not helped by Viagra, saw palmetto, yohimbe, or other non-medicinal or non-herbal methods. But to be treated like a child who cannot make his own relationship decisions is even worse, and Eric and Ridge will have a serious falling out when Eric finds out Ridge hired Justin and brought him into the situation, making it even worse!