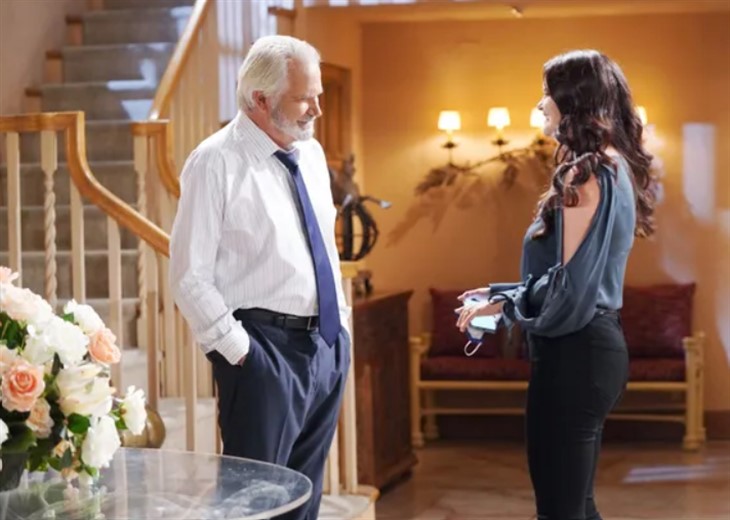 The Bold and the Beautiful (B&B) spoilers for Wednesday, September 29, 2021, reveal in Los Angeles Eric Forrester needing a friend and finding one in a very unlikely place.

The Bold and the Beautiful Spoilers – But What About Poor Donna?

Eric (John McCook) has been a mess but trying not to show it. He can’t make love to his wife due to erectile dysfunction and begged her to sleep with Carter Walton (Lawrence Saint-Victor) so Quinn (Rena Sofer) could be sexually satisfied and now he is sad about it. Somehow nothing is working out as he planned and when he has a moment alone with Katie Logan (Heather Tom), he unburdens his soul.

Katie also unburdens her soul. She has no idea what to do with the rest of her life. Should she take Dollar Bill Spencer (Don Diamont) back again or go it on her own? She is always forgiving Bill for one thing or another and is frankly tired of it. After their cathartic confessions, Eric and Katie are closer than ever. What will Donna Logan (Jennifer Gareis) think about this considering how much she is still so in love with her Honey Bear? Things are about to get messier than anyone ever imagined.

Ridge (Thorsten Kaye) hired Justin Barber (Aaron D. Spears) to learn just what the heck was going on with Quinn despite the fact that Justin recently assaulted Ridge’s son, Thomas Forrester (Matthew Atkinson), and locked him in a cage. Bygones be bygones, right? Well, not where Quinn is concerned, apparently.

Justin informs Ridge of his findings and he is enraged. How can Carter and Quinn do this to Eric again? He’s ready to confront them and demand the truth, but they don’t want to tell the truth because the truth would hurt Eric and that’s the last thing they want to do.

This affair was sanctioned by Eric — heck, he even begged them to do it — and it was supposed to remain a secret between Carter, Quinn, and Eric, but now it looks like way too many people are going to learn things they really didn’t need to know. Stay tuned to The Bold and the Beautiful weekdays to see how these stories play out.