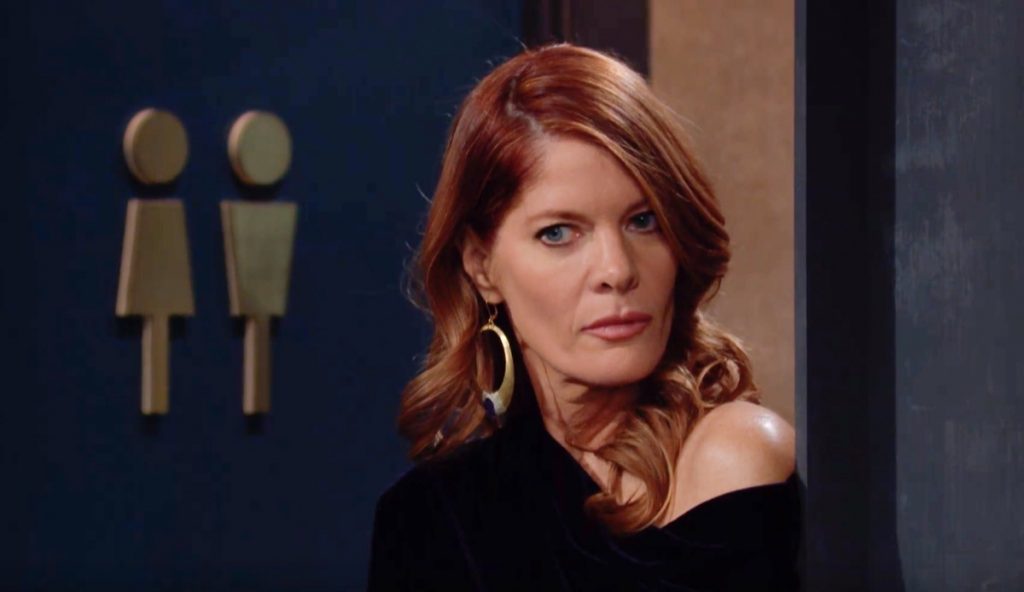 The Young and the Restless (Y&R) spoilers for Friday, February 14, tease that Phyllis Summers (Michelle Stafford) will head over to see Nick Newman (Joshua Morrow). At home, Nick points out that he thought Phyllis was going to Vegas. He’s suspicious about Phyllis’ change of plans, but they ultimately shift their focus to Summer Newman (Hunter King).

Nick’s frustrated and jokes about staging an intervention. He wonders if they can just hire deprogrammers to wipe Kyle Abbott (Michael Mealor) from Summer’s mind. Phyllis reflects on Summer’s stubbornness and feels they’ll have to wait on their daughter to ask for help.

The topic of Faith Newman (Alyvia Alyn Lind) comes up next. Nick points out that Faith is too smart about Sharon Newman’s (Sharon Case) condition and won’t let him gloss over things. She’s scared of losing her mom. Phyllis does her best to reassure Nick about what a great dad he is.

In Vegas, Adam Newman (Mark Grossman) wants Chance Chancellor (Donny Boaz) to leave and keep his boy scout reputation intact. Chance insists on joining in the upcoming meeting, so a sneaky cocktail waitress plants a listening device while they bicker. Back in Genoa City, Phyllis receives a text that lets her know they’re all set.

Adam and Chance meet with Riza Thomas (Tina Casciani), who’s got updates on the woman they keep talking about. She doesn’t believe her husband’s in witness protection anymore. Riza points out that the woman’s real affection is for all the cash she believes her hubby stashed.

Adam intends to pay off his problem and would pay twice as much if it’d keep him out of prison. Chance insists he wouldn’t let that happen and reminds Adam of his connections. He notes that Adam saved him from getting killed and calls what happened an accident. Adam simply reacted when he saw Chance in danger and did what he had to do.

Sadly, the people Chance worked for wouldn’t view it the same way. At the Grand Phoenix, Phyllis listens through the bug and gets the ammunition she needs. Later, Adam accepts this as his problem now and intends on doing whatever it takes to make it go away permanently. He doesn’t want to ever have to deal with it again.

At Crimson Lights, Rey Rosales (Jordi Vilasuso) checks in with Sharon on how she’s doing since starting chemo. Sharon reassures Rey and locks lips with him before Nick appears. She tells Nick that Rey’s been hovering and ultimately heads out.

Nick talks to Rey about the latest couple shakeups: “Kola’s” looming divorce and “Skyle’s” quick reunion. Although Nick hates that Summer’s caught up in all this, Rey blames Kyle and suggests Summer is a victim, too. Nick truly feels for Lola and knows this has to be rough. They eventually discuss Sharon, which leads Nick to offer his support to Rey. Since Rey has to be Sharon’s rock, Nick’s there if Rey needs someone, too.

At Jabot, Kyle steals kisses with Summer, who reminds him they’re at work and have to be all business there. They discuss their hookup bet from long ago, and Summer points out she’s grateful they didn’t sleep together that night. She wants a forever kind of love with Kyle because she’s loved him forever.

Jack eventually appears and finds them kissing again, so he voices his displeasure. However, Kyle contends that he’s trying to live honestly. Summer agrees that this has been a long time coming. Jack thinks people are going to judge Kyle and hold his past against him, but he wants both Summer and Kyle to move forward with kindness. They need to move beyond their mistakes and handle this appropriately when it comes to Lola.

At Sharon’s house, Rey finds her looking sick and wobbly. He steadies Sharon and urges her to focus on deep breaths, so she does. Sharon confesses that she was tired and had some stomach issues. It was like a wave came and tried to pull Sharon under, but she’s feeling better. Sharon insists that she can do this.

The Young and the Restless spoilers say another gripping episode’s in store. We’ll keep you posted as other Y&R news comes in. Stay tuned to see what else is looming on the CBS soap.