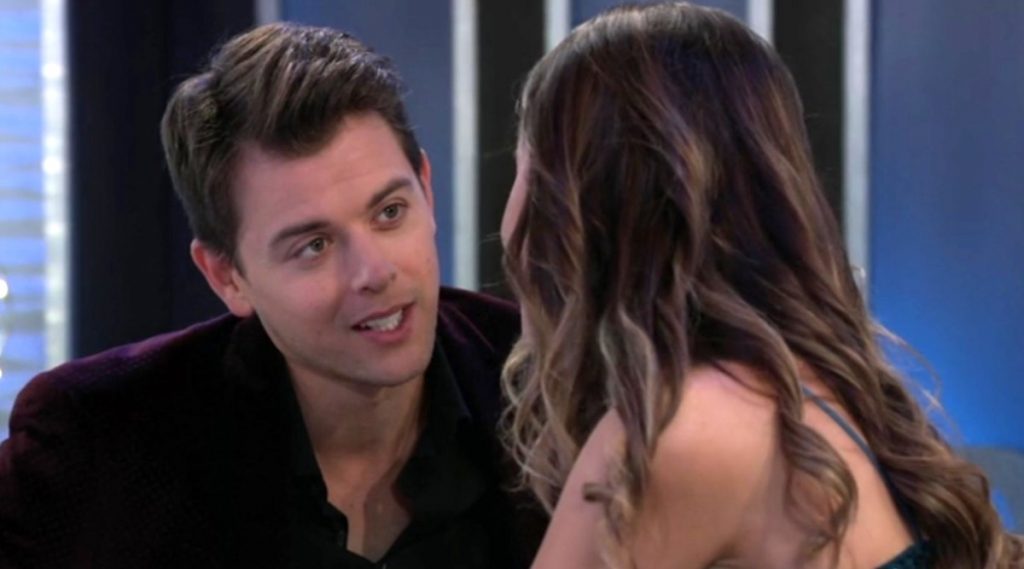 Michael Corinthos (Chad Duell) and his girlfriend Sasha Gilmore (Sofia Mattsson) are at Kelly’s and she tells him something that he questions – this may have something to do with her job as Lucy Coe’s (Lynn Herring) model and partner for Deception Cosmetics, as he asks her if Lucy is okay with it! The way Michael asks her the question, she must have dropped a zinger on him!

Sam McCall (Kelly Monaco) wants to know what someone wants to talk to her about – other General Hospital spoilers tease that Lucas Jones (Ryan Carnes) wants her honest opinion, so it sounds like she’s talking to her birth brother over at Turning Woods.

He may be asking her about his and Brad Cooper’s (Parry Shen) considering a cross country move to Portland, Oregon with Wiley Cooper-Jones (Erik and Theodore Olson). It sounds like since Damian Spinelli (Bradford Anderson) and his family are moving back to Port Charles from Portland, Brad may be in the running for Ellie Trout’s (Emily Wilson) job in Portland!

It sounds like a family affair at Turning Woods, as Brad is there with Lucas also, and excitedly tells him “I can’t believe we’re doing this!” It sounds like Sam gave her blessing for the move and they are making plans to move to Portland! Of course, Lucas will need to be formally okayed for such a move and released from rehab first. Shouldn’t someone talk to his mother Bobbie Spencer (Jacklyn Zeman) too before up and moving? She might be in for a shock!

Nelle Benson Archer (Chloe Lanier) has news for Detective Harrison Chase (Josh Swickard) and Willow Tait (Katelyn MacMullen) and shows up at their door to deliver it in person! There’s definitely the feeling of an unwanted visitor in the air as she tells them that Brad and Lucas are thinking about leaving town. What else might she tell them that she thinks they need to know?

Nina Reeves, (Cynthia Watros) taking the advice of Ava Jerome Cassadine (Maura West) goes to the Aurora Media office to talk to Jasper “Jax” Jacks (Ingo Rademacher). She wants to know if that is still an option, or if she had already blown it – it sounds like she is testing the waters for a romantic relationship with him!

Valentin Cassadine (James Patrick Stuart) – or should we call him Valentin Romanov now? – is almost done with a large bottle of whiskey when instead of a pink elephant, he hallucinates “Mommy Dearest” – Helena Cassadine (Constance Towers)! He asks her how she pulled off such a terrible lie! It does seem strange that Valentin would have his own Cassadine crest ring that he had never bothered putting on if somebody didn’t consider him a Cassadine! Helena’s maiden name was Romanov and poor Valentin is having an identity crisis!