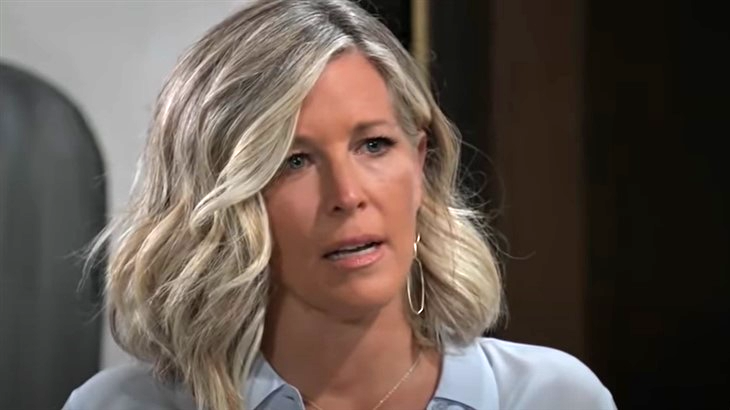 Viewers will recall that a few weeks ago, Nelle fell off a cliff, apparently to her death. We say “apparently” because if the body is not shown in a soap, usually the person is not really dead! Carly had chased her into a clearing after she ran from the Corinthos cabin.

Nelle had escaped after Michael Corinthos (Chad Duell) had tracked her there with Wiley Corinthos (Erik and Theodore Olson). Nelle had knocked Carly out, and when she came to she heard Nelle screaming for help. She hesitated, not sure if it was a trick.

But she found Nelle – hanging onto the edge of a cliff over a river. She tried to pull her up, but Nelle’s hands slipped and she fell. Carly saw nobody, and the police who scoured the woods couldn’t find her. She had shared the incident with Jasper “Jax” Jacks, (Ingo Rademacher) who advised her to keep quiet.

With Nelle and Carly’s history, she could be a person of interest if not a main suspect in a murder – depending on if Nelle’s body was found. It also would depend on the manner of death. Carly only told what happened up to when she came to and didn’t divulge the rest.

Carly finally confesses to Jason Morgan (Steve Burton) about what happened. He convinced her to tell Sonny Corinthos (Maurice Benard). After an interruption by Lulu Spencer (Emme Rylan) who came to pay her condolences regarding Mike Corbin, (Max Gail), Carly started confessing. Then Jason got a phone call. He left Carly and Sonny for a short time and returned. He told them that their “man at PCPD” called and said Nelle was dead and her body had been found on the Pennsylvania side of the river!

Carly told the whole story and that Jax knew, which Sonny was not pleased about. Then Detective Harrison Chase (Josh Swickard) came knocking on the door! He was there to deliver the news about Nelle in person and wanted to ask Carly more questions about the last time she saw her. She tells the same story she did the first time but is vague on details.

Jason asks Chase to come back tomorrow, as the Corinthos family is grieving Mike’s death. He agreed, but also said he was going to go to the coroner’s and check out the body for himself. Chase knows Nelle well enough to not put anything past her, and if the “positive ID” only came from her driver’s license, it might not be her body!

But then Carly got very worried – she told Sonny she realized that she had told Chase and Detective Valerie Spencer (Paulina Bugembe Lule) slightly different details! Jason and Sonny tried to calm her fears, since telling a story the same way in the same words would have been worse. Either way, damage control will have to be done!

IF Chase positively ID’s the body as Nelle’s, then the coroner’s autopsy will tell the rest of the tale. It may be difficult to determine a manner of death if she drowned – which is unlikely unless she was unconscious. Nelle was an expert swimmer and Chase knows that. However, if the cause of death is determined to be say, blunt force trauma to the head Carly could be charged. It’s pretty difficult to tell when a body has been underwater for a couple of weeks how the blunt force trauma occurred!