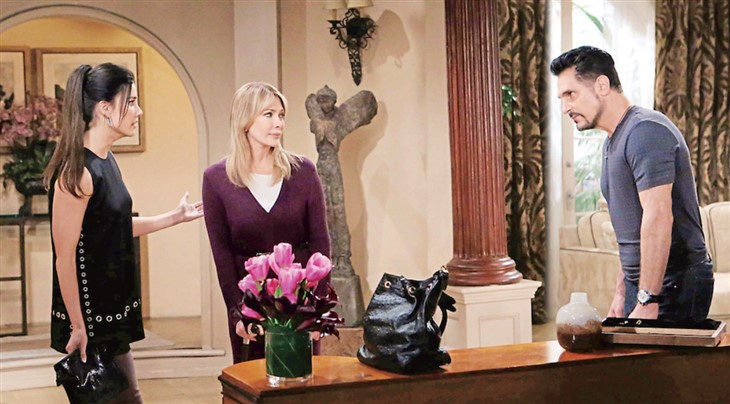 The Bold and the Beautiful rumors indicate that Taylor Hayes (Hunter Tylo) will return to help her daughter Steffy Forrester (Jacqueline MacInnes Wood).

As B&B has seen, Steffy is battling an addiction to pain pills.The storyline has already seen the beginning of Steffy losing her daughter Kelly Spencer (Colette and Avalon Gray). The fear of losing Kelly has caused Steffy to lash at everyone.

With Steffy’s addiction spiraling out of control, Ridge Forrester (Thorsten Kaye) and Thomas Forrester (Matthew Atkinson) will step in to help her.  And they may have another family member joining the intervention to save Steffy.

The Bold And The Beautiful  Spoilers – Steffy Needs Her Mother

One person that fans have noticed missing in the storyline is Taylor.

Many have pointed out that Taylor should be there for Steffy during her time of need. The last time Taylor saw is during the baby switch story when she convinced Steffy to adopt Flo Fulton’s (Katrina Bowden) baby, not knowing it was really Beth Spencer (Madeline Valdez).

Since then there’s been a few mentions of Taylor, who is traveling and doing charity work.

Fans have been asking for a Taylor return and there’s been a few hints that it may happen.

Taylor and Steffy have always had a strong mother/daughter bond. Taylor has supported her daughter and stood up for her against Brooke and Hope.  With Steffy’s life in shambles, now would be the time for Taylor to come home.

As viewers have seen recently, it seems Steffy’s pill addiction runs deeper. Although she started taking the pills to help with her injuries, she’s now using them to cope with emotional pain.  Throughout her life, Steffy’s dealt with one heartache after another and has had everything taken away from her.

The one person who understands Steffy’s pain is Taylor.  At one point, Taylor became addicted to alcohol as she dealt with the pain inflicted by her longtime nemesis, Brooke.

Taylor knows what it’s like to lose everything, and how easy it is to rely on drugs to ease the pain.  She doesn’t want to see her daughter go down the same path, and wants to help Steffy fight this battle.

When and if Taylor does return to Los Angeles to help Steffy, she isn’t going to be happy with the Logans raising another of her grandchildren.  Kelly is Steffy’s world and Taylor is going to be damned if Liam, Hope, and Brooke rip her away from Steffy.

The Bold And The Beautiful Spoilers & Recap Thursday September 24: Thomas Calls For Help, Steffy’s In Denialhttps://t.co/qPSwp0mMUQ

This will no doubt reignite Taylor and Brooke’s rivalry as Taylor orders Brooke to stay out of Steffy’s business.

Taylor’s had her life ruined by Brooke and she’s not going to let Steffy suffer the same fate.