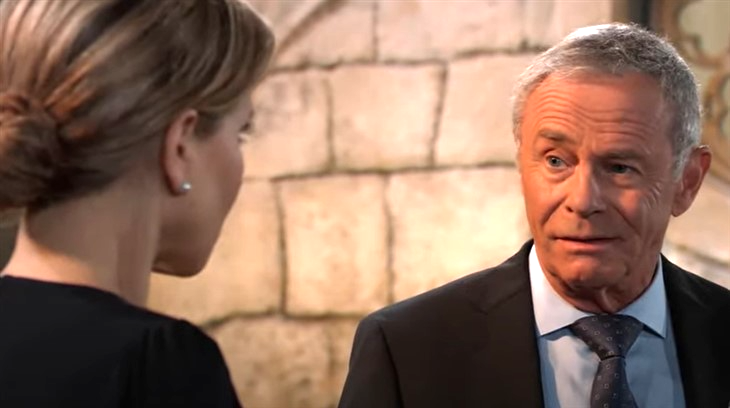 ABC General Hospital spoilers tease that General Hospital may be mixing up couples again, as soap operas frequently do! It doesn’t seem like they can leave happy couples alone! Let’s see what they might be up to now!

Viewers have noticed in recent episodes that Ned and Olivia Quartermaine (Wally Kurth, Lisa LoCicero) have been going through a rough patch. Olivia is upset that Ned is waaaayy too focused on work, and she’s not real happy that he kicked Brook Lynn Quartermaine (temporarily played by Briana Lane) out of the house. Ned has tried to make up with his daughter, but she is having none of it.

Meanwhile, Olivia found a supportive shoulder in Robert Scorpio (Tristan Rogers), empathizing with his presumed loss of his ex-wife Holly Sutton Scorpio (Emma Samms). Olivia was grieving her son, Dante Falconeri (Dominic Zamprogna), even though he wasn’t dead. He had been acting dead to everyone that loved him, and felt he was too dangerous to be around his loved ones. Dante wanted them all to move on and forget him, even his mother.

But Olivia wasn’t having any of that! As Robert and Olivia commiserated with each other, Robert pulled some strings with the WSB to score Olivia a visit with Dante. Robert warned her that Dante may not accept the visit, but at least it was worth a try. The two took off for Geneva, Switzerland where the WSB treatment facility that houses Dante is. He wouldn’t let her in, but he certainly heard her on the other side of the door – even the mama trick of calling him by his whole name didn’t work! To say Olivia was disappointed is the understatement of the century!

Then Robert got a call for help from a not-so-dead Holly, and a friend traced it to a casino in Monaco while they were at Holly’s memorial service. Olivia wouldn’t leave Robert’s side until the Holly matter was resolved! She did place a few calls to Ned, but left him worrying because an angry Brook Lynn deleted them from his phone!

Meanwhile, back in Port Charles, Alexis Davis (Nancy Lee Grahn) had her lover, Dr. Neil Byrne (Joe Flanigan) die in her bed, and has lost her law license! Ned, wondering what happened with Olivia, ran into her in a restaurant and noticed something was wrong with her wrist – he wouldn’t leave her side until he got her to General Hospital for a checkup!

Like Robert and Olivia, they could easily become bonded through working through some sticky situations – besides, Ned and Alexis have a past together! While they never went through with a marriage, they were engaged, and at one point in their lives, they were lovers. Ned is stinging from his daughter’s rejection and wondering if he and Olivia are ok; Alexis is broken-hearted and grieving Neil, her career, and now will be dealing with osteoporosis.

Alexis will certainly start feeling her age once the diagnosis sinks in, and Ned will be right there paying a lot of attention to her! Could old flames startup between the two old flames? He’ll certainly feel insecure with Olivia, and already does to some extent!

Olivia and Robert are dealing with emotional situations together, as Ned and Alexis also are. Is GH getting ready to shake things up with pairing Olivia with Robert and Ned with Alexis? It certainly could happen that the two pairs get closer than they intend to! Stay tuned to GH and keep checking General Hospital spoilers frequently for all the latest news, updates and developments!

General Hospital (GH) Spoilers: Nina Has Regrets, Blames Herself For Not Being A…