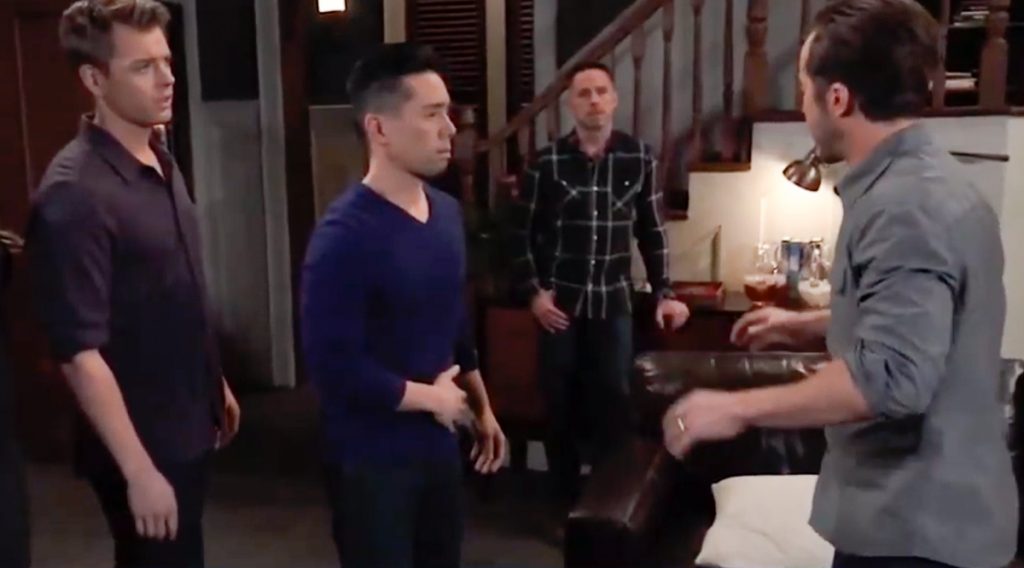 Detective Harrison Chase (Josh Swickard) gets a call that he’s needed over at the Corinthos house – but who’s making the call? That kind of sounds like Nelle Benson Archer’s (Chloe Lanier) voice – will he recognize it and realize she’s setting up a distraction so he won’t be at home with Willow Tait, (Katelyn MacMullen) who is babysitting Wiley Cooper-Jones (Erik and Theodore Olson) who’s not feeling well?

General Hospital viewers will recall when she tried to crash the going away party at the Corinthos house for Brad Cooper (Parry Shen) and Lucas Jones (Ryan Carnes) that Brad told her Wiley was sick and Willow was taking care of him – and this was after calling to make travel reservations earlier and peeking through the living room window at the Corinthos house to see if Wiley would appear or if Brad was telling the truth!

Cameron Webber (William Lipton) tells Trina Robinson (Sydney Mikayla) that he likes Josslyn Jacks (Eden McCoy) a LOT. It sounds like Trina was trying to ask him out because she doesn’t look real happy to hear this. She has known this for quite some time though, even back when Joss was dating Oscar Nero Quartermaine (Garren Lake Stitt) so this shouldn’t be a surprise. However, if you don’t succeed at first, try, try again, and if Trina is really into Cameron, she just might!

At the Corinthos house, there is quite an argument going on – Lucas has remembered what Brad told him the night of the crash, and he is irate – he shouts at Brad, “I’m not crazy, I know what I heard!” General Hospital viewers aren’t a bit surprised that Brad would try to tell Lucas he is confused and tell him that he never said anything like that! Julian Jerome (William DeVry) won’t be bailing Brad out of trouble this time, because he’ll never admit that he knew Wiley is really Jonah Corinthos, Michael Corinthos (Chad Duell) and Nelle’s baby!

Elsewhere, Curtis Ashford (Donnell Turner) confronts Jordan Ashford (Briana Nicole Henry) and wants to know what’s going on with her and Taggert! He had been tracking Taggert from when he questioned him earlier at Kelly’s – and didn’t get answers to his satisfaction – and saw them as they embraced on the docks at Pier 55 where another co-worker of theirs had just been found dead of an overdose!

Jordan had called the co-worker about Bob Massicotte (Randy J. Goodwin) and warned him and he was on his way to Port Charles to help with the case. It turns out that Bob, the dead co-worker in the DEA, Mark Simon (uncredited actor) and Taggert and Jordan had been on a deep-cover team busting Cyrus Renault (Jeff Kober) and now it’s down to her and Taggert who are still alive! This shook her up and Taggert hugged her! Now Curtis is convinced the two are having an affair!

Taggert must have returned to Kelly’s again as Mac Scorpio (John J. York) runs into him there, and has quite a reaction to seeing him – he remarks to Taggert, “You’re back in town, right as the mob war’s ready to blow up at Sonny (Corinthos, played by Maurice Benard)? Mac remembers very well that vendetta that Taggert had against Sonny for killing his mentor, who was Sonny’s abusive stepfather back in Bensonhurst!

Jason Morgan Attacks At The Pier

54 Water Street is the scene of the action as Jason Morgan (Steve Burton) apparently runs into some unexpected trouble at the warehouse that Renault has his unwanted shipments of drugs coming to. He was headed there to plant a bomb but sees someone on the ground tied up with his back against a box – it’s hard to tell from the way the scene is shot, but it could be Brando Corbin (Johnny Wactor)! Jason points his gun and shouts, “Hands up!”

Sonny Corinthos Gets A Warning

Sonny has gone to give Cyrus Renault some important warnings as they sit in Pentonville Prison talking on the prison phones on opposite sides of the glass. Cyrus tells Sonny that he’s about to make a very big mistake!