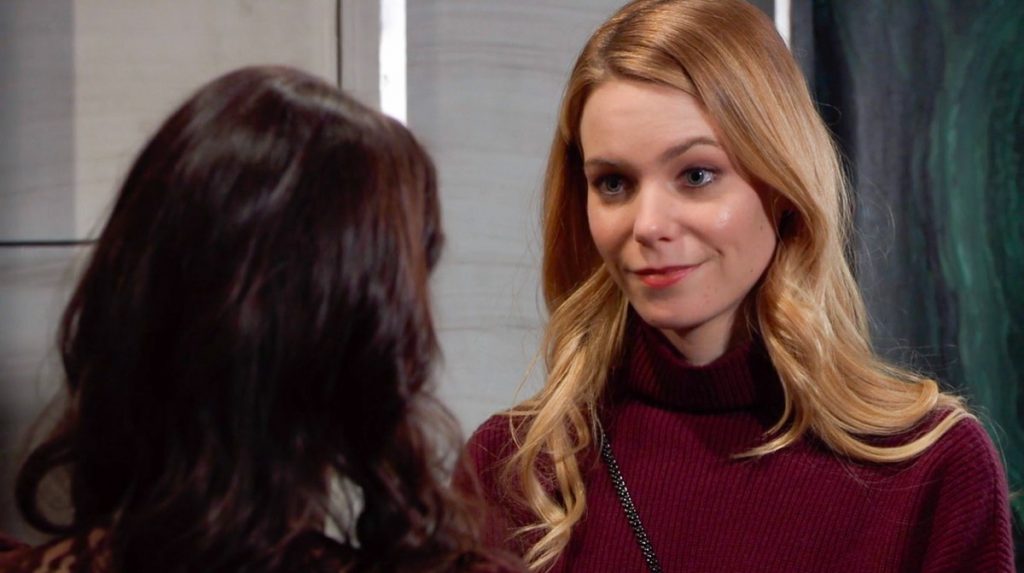 Welcome to your Tuesday, February 18th General Hospital (GH) recap! We begin our day at the Corinthos mansion, where Michael Corinthos (Chad Duell) is out on the patio when Sasha Gilmore (Sofia Mattsson) comes to check on him. She asks what’s on his mind and he says he’s going to miss Wiley more than he ever imagined.

Also at the Corinthos mansion, Carly Corinthos (Laura Wright) opens the door to let Julian Jerome (William DeVry) into the house. Bobbie Spencer (Jaclyn Zeman) goes to see who it is and they all agree its unfortunate that Lucas is moving cross country.

At the Metro Court, Nelle Benson (Chloe Lanier) is on the phone confirming the flights for her and Wiley to skip out of town. Sam McCall (Kelly Monaco) approaches from behind and asks where she is going?

At her apartment, Willow Tait (Katelynn Mcmullen) is saying goodbye to Brad Cooper (Parry Shen) who is leaving Wiley with her. Harrison Chase (Josh Swickard) arrives and she explains they are babysitting while Brad and Lucas go to their going away party.

Chase wonders if it’s the best idea for her to be Wiley’s guardian, maybe Michael would be better suited. There’s a knock at the door and its Finn, he tells them that he has left Anna. Chase is shocked and wants to know what happened, he likes Anna.

Anna Devane (Finola Hughes) run into Hamilton Finn (Michael Easton) at the Metro Court. He’s adjusting to living there with Violet who is enjoying room service. Suddenly the elevator opens and it’s Peter August (Wes Ramsey) who asks if Finn is joining them.

Anna and Peter sit down and she asks if he contacted the attorney general. Peter says that he did but he wonders why Finn moved out of their house.

At Kelly’s Diner, Curtis Ashford (Donnell Turner) seats himself down next to Marcus Taggert (Real Andrews) and says its time they got to know each other better. Marcus tells Curtis that he is divorced from his wife and he knows about the cocaine problem Curtis had. Taggert says he’s just checking on a friend and there’s nothing more to it.

In Jordan Ashford’s (Brianne Nicole Henry) office her son TJ Ashford (Taj Bellow) drops by and says she has something he needs. TJ says he’s popped by to get the engagement ring that she’s holding in her drawer.

Jason Morgan (Steve Burton meets Sonny Corinthos (Maurice Bernard) at his restaurant and says he think they can intervene a Cyrus shipment.

Sam McCall (Kelly Monaco) asks Nelle where she is going and She sarcastically asks if she’s seen Jason lately. Nelle says shes just moving out of the Quartermaine mansion never to be seen again.

Julian Jerome (William DeVry) asks where Sonny is and Carly says he’s only there because Lucas wants him to be. Lucas Jones (Ryan Carnes) arrives at the party and everyone questions him about Portland. Carly says she hopes they enjoy a new life away from Port Charles. The doorbell rings and it’s a security guard with Nelle.

Carly tells her that she’s not welcome as she calls out to her BFF Brad. Nelle says she wants to say goodbye to Wiley and he says Willow is watching him.

Jordan gets a call of a body on the pier and calls Taggert to meet her. She finds out its their friend Mark and wonders how he got to Port Charles. We find out they were on a 4 man team to take down Cyrus. Jordan and Taggert embrace for comfort as Curtis secretly watches and wonders what’s going on.

At the party, Lucas begins to remember the conversation with Brad before the accident. He remembers what was said and calls out to Michael….………flash to preview