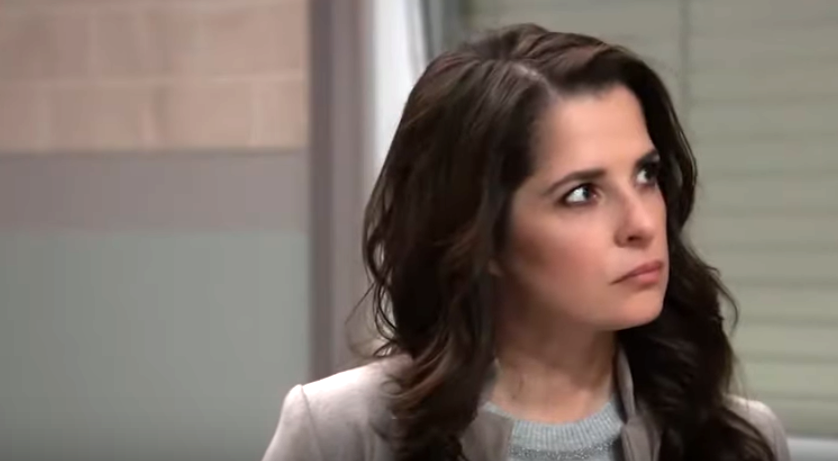 General Hospital’s spoilers for the week of February 25th say that Sam McCall (Kelly Monaco) will unleash on Julian Jerome (William DeVry). Sam and Julian have had a volatile relationship for years. However, other spoilers suggest the baby switch reveal. Could Julian’s part in the switch be discovered?

General Hospital’s Sam has had issues with her father for years. Julian tried to kill her mother and blamed it on his sister Olivia Jerome (Tanya Walker). Sam does not believe Julian was forced to hurt her mother and wants no part of Julian at all.

Sam also recalls Julian lying about his identity and then hiding behind her son, Danny Morgan (Porter Fasullo), when he was diagnosed with leukemia as an infant. However, Sam’s dislike for her father could cause her to like him even less. What does Sam learn to put her father on her radar again?

General Hospital’s Julian has helped Brad Cooper (Parry Shen) almost from the beginning of the baby switch. Julian saw Willow Tait’s (Katelyn MacMullen) baby at the hospital and had pictures taken with him. Julian noticed that something was wrong and eventually Brad confided in Julian about the baby’s death and the true identity of the child he has. If the baby switch is revealed, Brad isn’t about to go down by himself.

Julian has held this over Brad’s head for months, just like Brad has done with him. Julian might have done this to keep from hurting his son but Julian should have realized that eventually, the truth would come out and only hurt Lucas Jones (Ryan Carnes) more.

General Hospital’s Julian also caused the accident that almost killed Lucas. However, it is very unlikely that this would be the truth that Sam would confront Julian over. The PCPD couldn’t find the cause of the accident because of the damage to Brad’s car. Unless Sam was to hear Julian confess to Brad that he tried to kill him, there is no way anyone would know this. Will Julian’s murder attempt on Brad be revealed? Could Julian pay for his part in the accident?

No matter which truth is revealed, Sam will still have reason to hate her father. Sam may hate him more for hurting her brother as well. Will Julian ever pay for what he’s done to his children? Can Lucas or Sam forgive him for helping steal Michael Corinthos’ (Chad Duell) child? Will this open up a new feud with Sonny Corinthos as well?

Days of Our Lives Spoilers: Sonny And Will Separately Recall Their Last Valentine’s Day Together